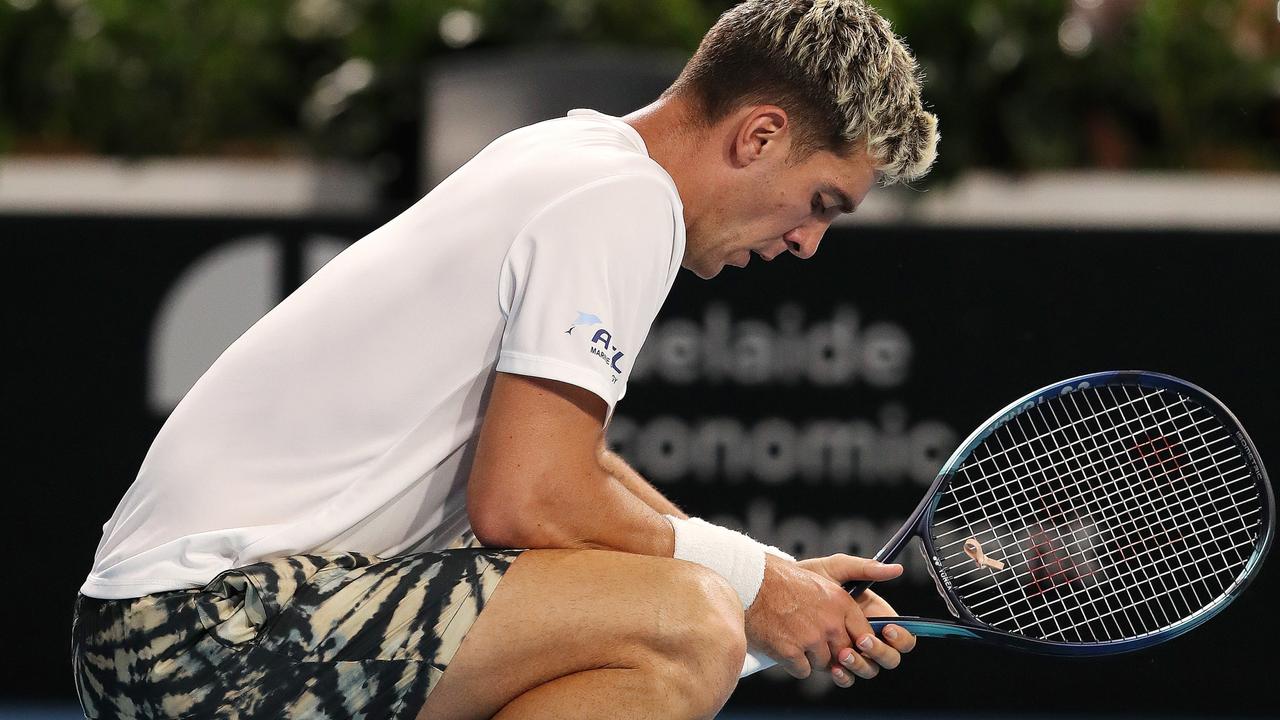 Thanasi Kokkinakis’ title defence is over after a gallant loss, but the local favourite will lament missed opportunities after getting back on top.

Local favourite Thanasi Kokkinakis’ dream of defending his Adelaide International crown is over, but the South Australian lost no fans after his fighting defeat to world No.26 Roberto Bautista Agut on Friday night.

In the first meeting between the pair, Bautista Agut held his nerve in the face of a furious challenge to win an absorbing semi-final 7-6 (7-4) 3-6 6-3 at Memorial Drive.

Bautista Agut will face South Korean Soonwoo Kwon in Saturday night’s final, after he overpowered British world No.40 Jack Draper in the other semi.

The hometown hero was brave, but will be left to rue missed opportunities.

After going down a break early in the third set, Kokkinakis created nine break points of his own – five coming in the fifth game and one in the tense last game – but couldn’t win any of them to level up the decider.

It was a top-quality clash of contrasting styles: the big serving, power hitting and aggression of Kokkinakis versus the patience, precision and ultra-consistency of Bautista Agut.

Kokkinakis described the Spaniard as “a brick wall” in the lead up to the match and it proved an accurate summary.

The result didn’t go his way, but the hometown hero can be proud of the level of play he achieved this week, which augurs well for his Australian Open campaign.

A day after he served 22 aces and slapped down 59 winners in a quarterfinal, Kokkinakis sent down 20 aces to 7 and 51 winners.

The local favourite, currently ranked No.110 in the world, played with admirable dare and intensity to defeat countryman Alexei Popyrin (ranked 113), Andrey Rublev (6) and Kecmanovic (28) on his way to the semi-final.

In all three wins, Kokkinakis started strongly to take the first set only to lose the second then finish over the top of his opponents in the third.

The South Aussie’s power game rattled opponents early, but the unflappable Spanish veteran absorbed the pressure applied from the other side of the net with apparent ease.

No game went to deuce, let alone break point, before the first set went to a tiebreaker where Bautista Agut hit five winners to land a telling early blow.

But Kokkinakis kept chipping away and created the first break point of the match in the fourth game of the second set.

Bautista Agut saved that one, but his 26-year-old opponent kept coming and broke to love to go up 5-3 then served it to love to set up an enthralling decider.

Kokkinakis had three break points in the first game of the third set but couldn’t convert any of them.

With that disappointment still front of mind, Bautista Agut made his move, creating his first break points of the match and taking the first opportunity to go 2-0 up then serve out.

If there is a silver lining it is that Kokkinakis has an extra day to prepare for Australian Open first-round opponent world No.57 Fabio Fognini.

Erdoğan says Turkey may accept Finland into Nato without Sweden