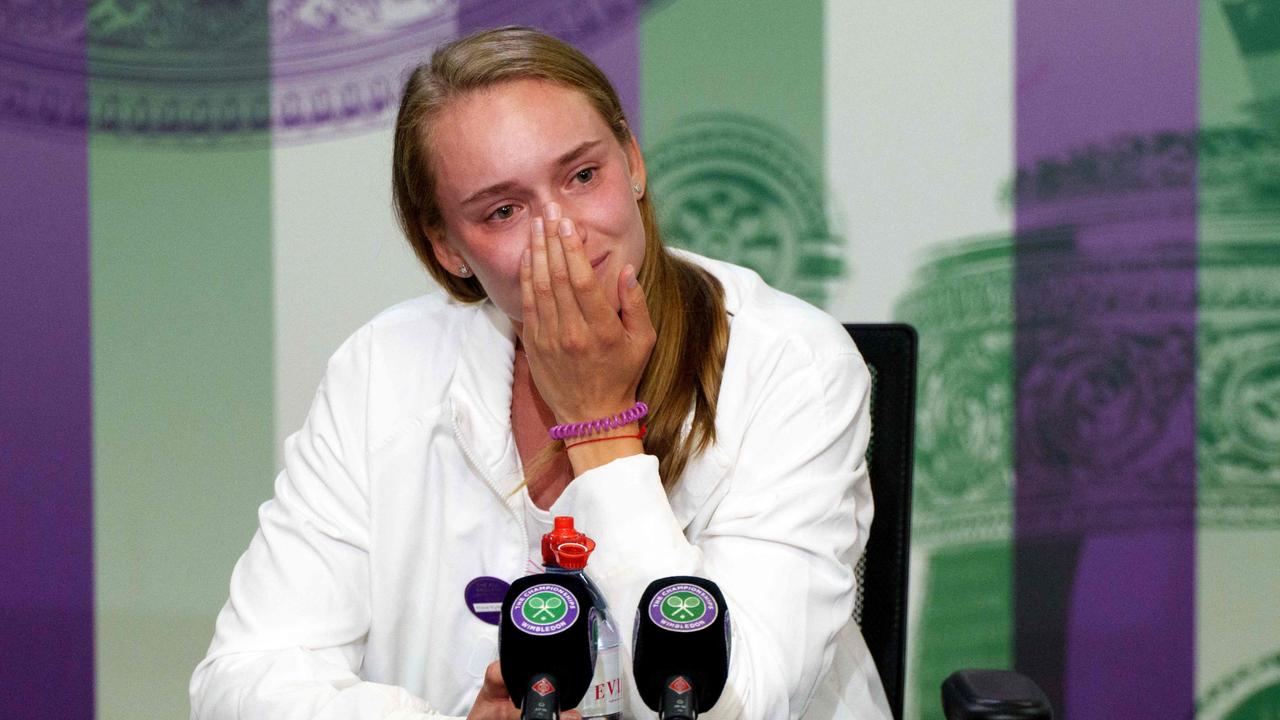 Reigning Wimbledon champion Elena Rybakina has been shunted to the outdoor courts, in a brutal snub for one of the tournament’s drawcards.

Rybakina, who picked up zero points for her Wimbledon triumph where she defeated Tunisia’s Ons Jabeur, will face Italy’s Elisabetta Cocciaretto far away from centre court – or even one of the other show courts.

No, instead she’ll be holed up on Court 13 in the baking mid-afternoon Melbourne heat, with her match scheduled for 4.15pm.

The decision incensed fans, with respected tennis writer Ben Rothenberg wonder why the 23-year-old had been ‘so quickly disregarded’.

“Reigning Wimbledon champ Elena Rybakina got relegated all the way out to the hinterland of Court 13 for her first #AusOpen match,” Rothenberg wrote on Twitter.

“I understand there is a saturation of recent women’s Slam champs, to an extent, but has a reigning Wimbledon champ ever been so quickly disregarded?”

The pair will open John Cain Arena on Tuesday, with the 11am start not expected for a showdown of two of the highest-profile stars on the men’s tour.

Rafael Nadal has shut down a rival’s retirement theory regarding the Spanish superstar.

German Alexander Zverev speculated that the French Open could be Nadal’s final tournament before deciding to hang up his racquet.

“Rafael Nadal will announce his retirement at Roland Garros,” Zverev told reporters at Melbourne Park on the eve of the Australian Open.

“I don’t wish him this, but I think he will play a big tournament, maybe wins it and then says goodbye.”

However, Nadal was having none of it when the theory was put to him.

“I don’t know what’s going to happen in six months,” he said.

“I have a very good relationship with Zverev, but not enough to confess something like that to him. The reality is that I’m here to play tennis, try to have a great 2023, fight for everything that I have struggled throughout my career and I don’t think about my retirement.”

Alexander Zverev believes the 2023 French Open could be the last time we see Rafael Nadal on a tennis court.

The German world No.12 has returned to the sport this year after a horrific injury which saw him tear three ligaments in his right ankle during his semi-final match against Nadal at Roland Garros in 2022.

But as Zverev looks forward to a year in which he hopes brings a first ever Grand Slam title, he believes that it could be the last for the tennis legend.

Not only this, the former No2 believes the Spaniard will take his last bow by claiming his 15th title on the famous clay court at the French Open.

“I don’t wish him this, but I think he will play a big tournament, maybe wins it and then says goodbye.”

Speculation of retirement has surrounded Nadal for the last few years, yet rumours have always been shut down by the 22-time Slam winner.

But at 36, Nadal has shown no signs of slowing down, claiming the Australian and French Open titles last year whilst sitting second in the world rankings behind countryman Carlos Alcaraz.

If Nadal was too retire, he would join long-time friend Roger Federer who decided to call it a day on his career last year, four years after his final Grand Slam win in Australia 2018.

Before any talk of retirement continues however, both Zeverev and Nadal have the Australian Open to focus on.

The two met in Melbourne back in 2017, with Nadal edging out the win over five sets in the round of 32.

If they were to meet again in 2023 it would be at the Rod Laver Stadium in the final, with the players being in opposite sides of the draw.

First, Zverev will have to take on a qualifier in the first round whilst Nadal will meet Great Britain’s Jack Draper as he looks to add a 23rd Grand Slam title to his collection, the most of any player in history.

7:45AM: MOTIVATIONAL VIDEOS BEHIND POPYRIN’S RETURN

A refreshed coaching line-up and motivational videos on social media have Alexei Popyrin ready to exorcise the mental demons that haunted him during a “tough” 2022 campaign.

The New South Welshman reached a career-best world ranking of 59 in late 2021 but dropped out of the top 100 last season after a series of early-round exits in tournaments around the world.

Popyrin has twice reached the third round of the Australian Open, building a reputation over 2019-21 as a player of the future.

Still just 23, Popyrin says last year’s failures served as a steep learning curve, adding a beefed up coaching team has set him on the right path for 2023.

“Last October, I said, ‘Enough’s enough’. I started to plan out my team, hired a coach, kept my second coach, got a new fitness coach and a new physio,” Popyrin said on Sunday.

“I got Xavier Malisse (former Belgian world no. 19) in my team. He’s in my corner right now. “He’s really helped me a lot in terms of my game, but in terms of the mental side, in terms of trying to stay positive … He’s always sending me those inspirational videos, quotes, trying to keep my head space in a good space.”

Popyrin has since adopted something of a nothing-to-lose mindset, saying his ranking “can’t really drop any further than it has already”.

The lanky competitor, a wildcard selection for the tournament, comes up against Tseng Chun-hsin in his first round, a 21-year-old from Taiwan who he defeated at the first round of last year’s US Open.

7:00AM: TSITSIPAS REVEALS UNIQUE SOURCE OF INSPIRATION FOR AUS OPEN

Greek gun Stefanos Tsitsipas is drawing on samurai warrior culture as he prepares for Australian Open battle in a bid for his maiden grand slam title.

The 24-year-old ace out of Athens will sport a playing kit based on the “ancient warrior spirit of Japan” for the tournament, inspired by his interest in studying cultures around the world.

Tsitsipas acknowledges the impact of Ancient Greek culture – a deep and broad discipline in its own right – but says looking beyond the history of his home soil is helping him reach an extra level.

“There are other cultures out there that are also very exciting to learn about, to get to know better. Japanese culture is a very modest, very fair culture in their society, as well.

“It has intrigued me in a way to follow it more closely, to learn from it. I think there’s so many lessons you can take – even tennis players – by learning about history, learning about how things evolved.”

Tsitsipas says he was drawn to the samurai “fighting spirit”, a value he hopes to embody through his campaign.

“All these fighters that led Japan to its modern society today, traditions are hidden, they are there, but they are hidden.

“Not many people know about the Japanese culture. I have been very interested in learning more about it. The Japanese jersey represents me at its fullest.”

Tsitsipas commences his quest on Monday night against Frenchman Quentin Halys, an opponent he hasn’t bothered to acknowledge.

“I don’t know,” he says when asked what he makes of his first-round task. “I don’t know him at all.”

Researching ancient cultures clearly leaves no time for studying the world no. 64.

Still, Tsitsipas says the “right execution” will come from the “right preparation”, with “staying in the game” to be his chief focus for the tournament.

“I need to constantly be in the mindset of bouncing back stronger,” he said. “We have younger guys coming from behind (and) we still have Novak Djokovic and Rafael Nadal playing good tennis.

“We’re dealing with a lot of different things being thrown at us. In my case, I know that this year a lot of things can be done. I have the capacity to withstand the pressures and the challenges.”