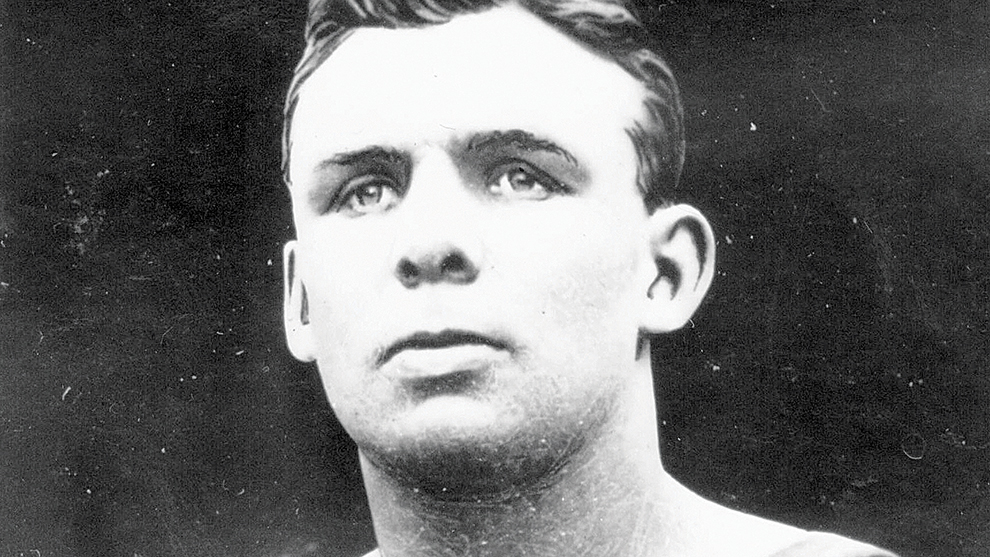 IT SEEMS to be an accepted part of the game nowadays for two boxers, in the build-up to a big contest, to engage in a verbal, and sometimes physical, altercation at the weigh-in, or during a press conference. This is often decried by traditionalists who remember the so-called good-old-days when the two contestants usually exchanged pleasantries while shaking each other’s hands. There is no doubt that things have deteriorated but were things always so well-mannered before?

The first major spat that I can clearly remember, and to this day I think, still the most notable to take place in the UK, was in 1985 when Mark Kaylor and Errol Christie engaged in their notorious street brawl following a pre-fight press conference for their epic battle in a final eliminator for the for the British middleweight title. And who can forget the shenanigans that took place when David Haye and Dereck Chisora came together at a press conference in Munich back in 2012?

Back in 1930 Ernie Rice of Hounslow and Harry Mason of Leeds met in a routine 15-rounder at the Ring, Blackfriars. Both men were ex-British lightweight champions and they did not like each other. A few days before the contest they, along with their managers and the promoter, met at the Savoy Grill, a prestigious restaurant in Central London, to agree on who should referee the contest. After about 10 minutes things got nasty and three tables were overturned, wine, food and cutlery were strewn across the floor, and waiters and fellow diners had to step in to separate the two.

Witnessing the event was the wife of the Chancellor of the Exchequer. It took 20 minutes to restore order, when it was seen that Mason’s mouth was bleeding and Rice’s clothes were in tatters. The Board of Control met three days later and, after an investigation, the bout was allowed to go ahead.  The venue was packed to the rafters and Rice, the Londoner, was cheered into the ring. Within a minute he was booed out of it. After hitting Mason low at the commencement of the bout, and putting his man down, he ignored the instruction of referee Matt Wells to stop boxing and launched into Mason whilst he was on the floor, completely losing control. Rice was disqualified after about thirty seconds boxing.

Another incident, and one that I was unaware of until recently, occurred in 1921 between two very well-known boxers. Joe Beckett, from Southampton, was the reigning British heavyweight champion at the time. Two years before, he had suffered ignominious defeat at the hands of Georges Carpentier when he was knocked out in the first round. He would go on to suffer the same fate in 1923, this time within only 15 seconds, and it is for this that he is largely remembered today. He wasn’t a bad champion though, with a murderous left hook. In 1920 he gained his most notable victory, beating an elderly ex-heavyweight champion of the world in Tommy Burns, the Canadian who famously lost to Jack Johnson in 1908. Beckett handled Burns with relative ease, stopping him in seven rounds at the Royal Albert Hall.

In his next contest against the American Frank Moran, Beckett was sensationally flattened in only two rounds. The following year Burns publicly stated that Beckett appeared to be frightened of Moran and his famous punch, and that he stayed down after being floored.

Beckett and Burns, along with Carpentier and Jimmy Wilde, were guests of honour at a Rugby League match involving Bradford Northern, and at a reception in a Leeds hotel following the game Beckett launched into his ex-rival, with the two men coming to blows in what was, supposedly, a fiercer fight than the one that occurred in Kensington the year before.

Thankfully, once words and blows had been exchanged, the two men put their differences behind them and moved on, as, I am pleased to say, did Kaylor and Christie in 2010.