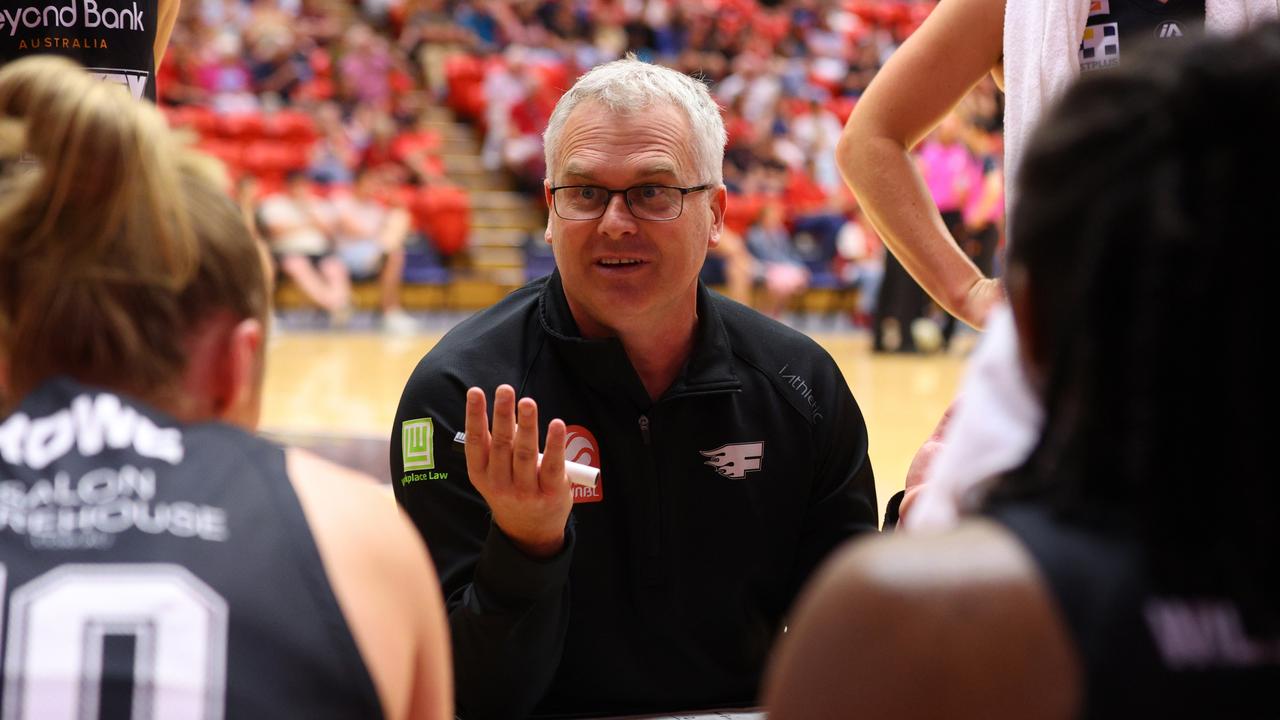 The Flames refused to comment on the nature of the probe involving the Australian basketball legend, but News Corp understands lawyers are involved and an independent firm has been engaged to conduct the investigation.

On Wednesday, the club issued a pair of tweets revealing Shane Heal and daughter Shyla Heal, the Flames’ starting point guard, were late scratchings from the clash with Southside Flyers. The Flames also stated Opals great Shelley Gorman would take the reins as interim coach.

It is not clear when or if Heal, who is contracted for next season, will return to the sidelines for the Flames.

The depleted Flames, on Wednesday night under Gorman, pushed the finals-bound Flyers all the way, Tiana Mangkahia stepping up in Shyla Heal’s absence with 26 points in a 96-91 defeat, basketball legend Lauren Jackson winding back the clock with 30 points for Southside.

Mystery surrounds the absence of Sydney coach Shane Heal from the sidelines as the plucky Flames were doused by the Southside Flyers thanks to another legendary performance from basketball GOAT Lauren Jackson.

With Shane Heal and daughter Shyla Heal both ruled out just hours before Wednesday night’s clash, the Flames, under interim coach Shelley Gorman, shared the load against the third-placed Flyers.

But a vintage Lauren Jackson 30-piece — fractured foot and all — was a 196cm mountain too steep to climb as the Flyers avoided a boilover in a 96-91 shootout.

The Flames, on Wednesday afternoon, issued a pair tweets, one minute apart, revealing Shane Heal, a Boomers legend, was “unavailable to coach” and that Shyla Heal, the team’s leading assist-woman at 4.7 per game and second in scoring at 15.6, would miss “due to personal reasons”.

Without the key playmaker, the sixth-placed Flames continued their impressive mid-season resurgence, led by Tiana Mangakahia, who stepped into the starting five in Shyla Heal’s absence.

Mangakahia took the lead with 26 points, 8 assists, 5 rebounds and 3 steals, backed up by Jocelyn Willoughby, who fouled out with 18 points and 5 assists, while Keely Froling and Hannah Sjerven had 16 each.

News Corp revealed on Tuesday Jackson has played through the pain of a fractured foot for the past six weeks but it did not stop her producing her most-devastating performance for the Flyers, putting the smaller Flames to the sword down low on her way to a 30-point classic.

The Flames looked the better team for much of the night, but the talent-laden Flyers stood up when the chips were down and the Sydney well went dry.

Just traded from Dallas to the New York Liberty, WNBA veteran Kayla Thornton put the Flyers back in front with 4.21 to go in the game and were good enough to hold the Flames off, new Opal Nyadiew Pouch producing two rejections in the last 20 seconds to preserve the five-point win.

The sixth-placed Flames endured a horror start to the season, losing their first five games, before claiming three of the past five to inject some hope into their WNBL campaign.

Shane Heal was yet to return phone calls or texts. The Flames would not comment further.