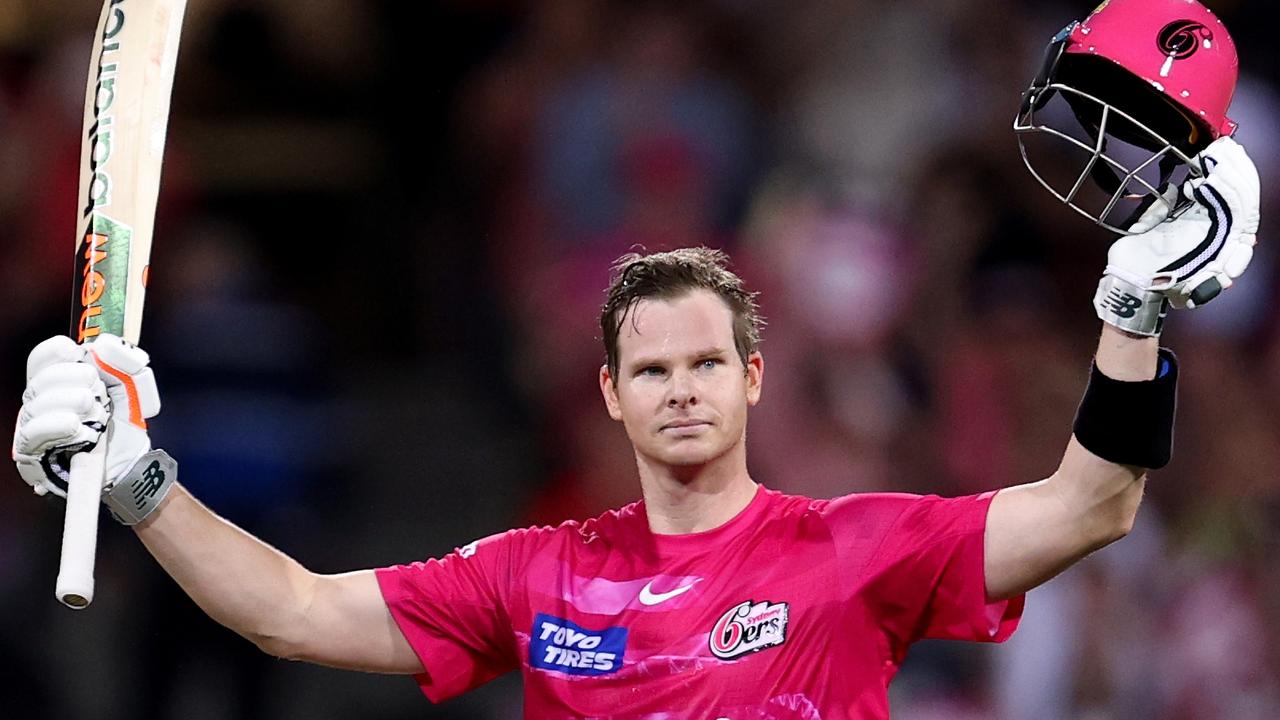 Steve Smith more than doubled the Sydney Thunder’s entire score in a ridiculous performance at the SCG.

A magnificent 125 not out from 66 balls by Steve Smith has powered Sydney Sixers to an emphatic 125-run win over Sydney Thunder at a heaving Sydney Cricket Ground on Saturday night.

After showers reduced the match to 19 overs a side, Gurinder Sandhu dismissed Ryan Philippe and Kurtis Patterson and the Sixers were 2/32. That was as good as things got for the men in green. From there it was The Steve Smith Show. And it was a thrill-a-minute.

He walked down the track and hit cut shots and cover drives. He hit hook shots, straight drives and slog-sweeps for six.

Typically, he did it his way: a flat-batted ‘tennis shot’ off one leg into the Members Stand had the power and poise of West Indies great Viv Richards – with a bit of Gus Logie thrown in.

Smith’s 50 came in 31 balls. His century came in 56 balls and was brought up with a six over long-on that drew a massive roar from the sold out crowd of 38,757.

He would hit nine sixes and five fours. With Moises Henriques (45* off 36) he amassed a BBL record third-wicket partnership of 155 and powered the Sixers to a formidable 2/187.

In reply Sydney Thunder was never in it and were bowled out for 61 with three overs to bowl.

The win was Sydney Sixers fourth in a row in ‘Sydney Smash’ derbies. Thunder remains in fourth position on the BBL ladder and likely must win their last game against Melbourne Stars on Wednesday to make the top 5. Bull Pokes Bear Following Smith’s other 56-ball century at Coffs Harbour on Tuesday, Warner queried, with only half his tongue in cheek, how Smith would go clearing the longer square boundaries at the SCG.

Smith’s first six – a mighty slog-sweep off over square leg off left-armer Daniel Sams – drew a huge roar from the largely pink-clad crowd and a wry smile from Warner at mid-on.

Ship Comes In “He’s been bullied by ‘Shippy’,” Warner declared at drinks after Sixers coach Greg Shipperd had asked umpires Greg Davidson and Phillip Gillespie to change the soft ball. “Shippy said ‘We want the ball changed’. The umpire said ‘We’ll have a look at it after two overs’ … That’s okay, that’s the umpire’s decision. As long as it’s the same for us.” Soon enough Smith smashed Sams down the ground for four, the shot splitting the ball which umpires decided to change.

Baptism by Smudger The Thunder named Joel Davies for his second BBL game and asked the 19-year-old to bowl his left-arm orthodox spinners at a set Smith, who twice smashed him for six down the ground.

Cutting on the slide On an outfield slippery from pre-match showers, Smith hit a lofted drive to wide mid-off where the ball pitched and stopped. Ben Cutting gave chase and, like a baseball player stealing second, slid along the ground, and by the ball and nearly into the boundary himself.

Cricket Australia and broadcasters Channel 7 and Foxtel have been urged to reconsider their decision to shorten the Big Bash.

Although the reduction in BBL matches isn’t slated to kick in until the new TV rights deal rolls over in two summers’ time, talks are currently underway between the networks and CA about whether or not to fast track the slashing of games from 61 to 43 to begin immediately next season.

Sydney Sixers championship-winning coach, Greg Shipperd has pleaded with Cricket Australia not to expedite the games cut, hopeful the Big Bash’s resurgence in TV ratings and crowd numbers can present a powerful enough case for administrators to change their minds on a permanent reduction.

Shipperd took aim at CA for bowing to broadcaster pressure to cut the number of home and away matches per team from 14 to 10 in the first place, labelling it “crazy” and adamant it will hurt the next generation of Australian cricketers.

“Absolutely crazy. And with these recent results I would be bemused with the media stations that are controlling the narrative around reducing the competition,” Shipperd told News Corp.

“I think it’s bad for our domestic players. You’ve got all the highly paid international superstars not even here and yet we’re braining it with crowds and eyeballs.

“Perhaps it might be some of the commentators, some of the ex-players that are leading the way behind the scenes to reduce from 14 games to 10.

“I’m not sure their motive around that but from a coaching point of view it won’t be good for our domestic players to play less cricket. I think playing more cricket is going to improve them and continue to strengthen this competition.”

Fox and Seven have only recently signed off on a $1.5 billion TV rights deal to span seven seasons, with the streamlined 43-match BBL season a cornerstone of the new agreement.

Since the deal was signed off on in early January, the BBL has returned to the halcyon days of beating the Australian Open tennis on its opening two nights, with Fox Sports up 27 per cent on ratings and the overall coverage up over 10 per cent across Fox and Channel 7.

But Shipperd has urged CA to buy themselves more time, in the hope a weight of evidence from this season and next might compel decision-makers to see that a 61 game season can work.

“I would be bemused why Cricket Australia would want less product based on the recent results, both on the field. It seems an oddity that they would be against it.”

Shipperd’s anger at the move to reduce the number of BBL matches is based on his belief that it will have a detrimental impact on the development of young cricketers.

One of Australia’s longest-serving coaches understands why established Australian international stars might feel differently about the longer schedule, but says that attitude shouldn’t dictate the fate of the domestic players who form the bulk of the competition.

“The less games you play, the less you learn. The less you improve,” Shipperd said.

“This goes back to the 80s and the 90s where they would have a domestic one day competition and the players would play 6 or 8 games a season while the international players would be playing 30, 40, 50 games a year and obviously getting better.

“Someone who is doing something more often than other people is going to widen the gap of the skillsets that you need to compete with.

“Thankfully our domestic one day program was expanded to reflect that notion. And this would be an absolute backwards step as far as I am concerned in the development of our next generations of players.

“I can totally understand the all format players that have got incredibly busy schedules and as well they choose to play in other competitions around the world. For them to have that feeling that it’s too much.

“But that should not be an impost on our players that are not in that position. And you could link that comment I guess to the people who might be commentating on the game.”

Test opener Usman Khawaja says Mitch Swepson has been a victim of “circumstances” and rejects suggestions the Queenslander has fallen down the “pecking order” of Australian spinners.

Leg-spinner Swepson is one of four tweakers in Australia’s squad for next month’s tour of India.

However, he no longer seems Australia’s second-choice spinner behind Nathan Lyon after left-armer Ashton Agar was chosen as Lyon’s co-spinner in the recent SCG Test against South Africa.

Perhaps helping Swepson’s cause of playing in the four-Test series against India was Agar’s ordinary bowling display in Sydney. He failed to take a wicket in 22 overs and rarely threatened the South African batsmen.

“I don’t particularly think he’s down the pecking order,” Khawaja said of Swepson.

“I just think circumstances this year have made it a little bit harder for him to get wickets.”

Swepson missed Queensland’s first Sheffield Shield match of the season in early October after being called into Australia’s T20 squad.

He then starred for the Bulls in a rain-affected clash against NSW in Drummoyne, taking eight wickets for the game.

However, Swepson was barely required in a couple of Shield matches that ended in quick time due to green-top wickets.

“At the start of the (season), he actually didn’t get to bowl a lot for us (Queensland) — we played on some pretty green wickets,” Khawaja said.

“Fast bowlers just dominated Shield cricket at the start of the (season), so it’s a bit unfair to then judge Mitch on the start of this (season) when he actually didn’t get a lot of wickets where he could bowl on.

“He has been a terrific bowler for us over a long period of time. I don’t like to look at what happened in this game, or that game – he has been unbelievable for us.”

“Us” includes the Brisbane Heat, who host the Hobart Hurricanes in Friday night’s BBL clash at the Gabba.

Victorian runs machine Peter Handscomb says the criticism he and his technique suffered taught him many things, but not about how to bat, how to block out the trolls. Steve Smith and David Warner have spent the majority of their lives together, yet couldn’t be more polar opposites. We go inside their intriguing relationship. The BCCI will review Michael Clarke’s $150k commentary stint in India, with the gig in some doubt after video of his public bust-up in Noosa emerged. The race to KFC SuperCoach BBL glory is on, with January 25’s finish line well and truly in sight. But there’s still plenty of time to make a charge – these numbers will help. The writers of cricket’s rulebook, the historic Marylebone Cricket Club, has been forced to clarify the Mankad rule after the ‘ambiguity’ created by Adam Zampa in the BBL. Shane Warne was Mitch Swepson’s most public and powerful supporter. And while he misses the sound of his voice, he takes on his advice.