What was behind star pair’s frosty handshake? 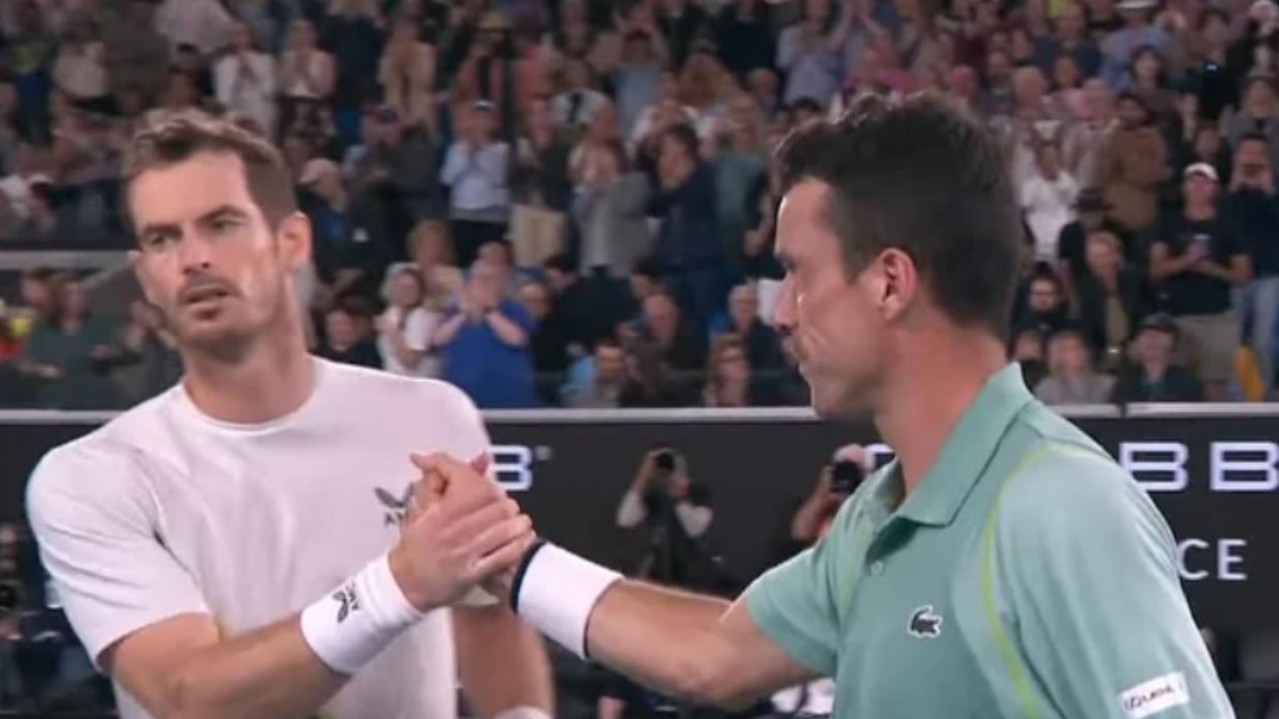 Andy Murray has the ensured global support whatever he does after his Aus Open heroics but it was an exchange at the net with and his opponent that went viral. FOLLOW LIVE

Andy Murray had a crowd of 7,500 in his corner all night long in his Saturday blockbuster against Roberto Bautista Agut and the one-sided nature of the fans clearly got to the Spaniard.

Murray’s 4:05 am finish eventually caught up with him as he bowed out in typically defiant style in round three.

The 35-year-old was clearly feeling the effects of his epic five-setter in round two, which started on Thursday but ended in the early hours of Friday.

Social media lit up with people questioning what beef the pair had with Agut later hinting the sway of the crowd and raucous support had irked him.

“Today was a tough match. I think I did a great job.”

Margaret Court Arena was dubbed the “Murray madhouse” with the noise from the crowd reaching decibels you’d expect from the championship winning point in a final rather than every time the Brit won a point, game or set.

If you’re not ready to hear the brutally honest truth then don’t go near Belinda Bencic’s coach.

Last year the Swiss star hired Dmitri Tursunov – former top 20 player and previously coach to some of the biggest names in women’s tennis. There has been a transformational shift to her game.

Two weeks ago she won in Adelaide and now Bencic is in the fourth round at the Australian Open in a wide open women’s draw.

Brutal honesty is working for the 25-year-old.

“He’s definitely a very tough coach, for sure,” she said. “He definitely doesn’t talk about everything else around the point and just really tells you what you need to hear, and sometimes you really need to hear the uncomfortable stuff.

“That’s really what I’m looking for. I’m trying to improve everything but he just pushes me a lot, so it puts me out of my comfort zone. So I don’t feel like, oh, I’m playing so well in practice, everything is great. Like then I come to the match, and you know in the match you’re also out of your comfort zone, so definitely I’m trying to do what he’s telling me.

It’s working so far, so I’m definitely trusting him a lot. I just feel like we have a great year in front of us.”

Live sport commentary is a tough job, even the best in the business get caught out.

There are plenty of sporting expressions that bring with them x-rated double-entendres.

“How do you respond to deep hard balls,” one says.

“Yeah you’ve got to really stay nice and low,” is the response.

Before both are unable to hold back a fit of giggles.

It wasn’t the only fit of laughter that interrupted play at this year Aus Open.

Arnya Sabalenka was serving for the match in her clash against Elyse Mertens when someone in the crowd appeared to let rip.

“What was that? asks one of the commentators.

“Some sort of indescribable noise from the crowd,” was the diplomatic response

8am: DJOKER HINTS HE’S CLOSE TO THE END

An ailing Novak Djokovic said every moment counted now that he was in the “last stage” of his career, after battling past Grigor Dimitrov and into the Australian Open last 16.

The Serb came through a titanic 77-minute first set before taming the Bulgarian 7-6 (9/7), 6-3, 6-4 on Rod Laver Arena, needing treatment twice on his troublesome hamstring.

He will face home hope Alex de Minaur for a place in the quarter-finals after the 22nd seed defeated Frenchman Benjamin Bonzi in three sets.

Winning once again in Melbourne would also return him to world number one for the first time since June.

Now 35, Djokovic said he was savouring each tournament more. “Every season counts I guess now, when you come to the last stage, the last quarter, of your career,” he said.

“Obviously you start appreciating and valuing each tournament more because you might not have a lot left in the tank.

“I’ve been truly fortunate to do what I love, I love the sport, I love competing. It’s been almost 20 years now of professional sport. I can’t be more grateful than I am.”

7AM LEGEND ANOINTS WONDER KID AS TENNIS’ NEXT BIG THING

Sebastian Korda is the player to beat at the Australian Open — according to the greatest player of all time.

Laver liked what he saw in that clash, and has backed in the 22-year-old to make a real stand in the second week.

“It’s nice that the young players that are coming on now,” the 11-time slam winner, including two calendar grand slams, said.

“There’s one guy – I think Korda. He beat Medvedev (on Friday night). And I think he’s the one who will be one of your next champions out there.

“There’s four or five others that are 18 years of age, 19, and they’re getting the experience and getting to play down here.”

Laver, who was ranked the top player in the world for seven years straight and has more career titles than any other player, said Korda’s performance against Medvedev on Friday showed he had potentially taken the next step.

“He’s been a great young player,” he said.

“Once you get past playing some of these also-ran players (it’s one thing), but then when you’re up against Medvedev, and you still perform and compete – you’re prepared to put the effort in. I think I see him going a long way.”

Medvedev discovered the unique nature of Korda’s game first-hand, and described the young gun as “one of the strongest hitters” in tennis.

“There are some other guys playing like this, but they miss more than him. And he didn’t miss that much,” the Russian said.

“His game (is) kind of different from everybody because very aggressive and very early he takes the ball. A little bit maybe like Novak (Djokovic). But, yeah, well, not every player is capable of doing that, so that’s beautiful and that.

Korda revealed after the pair’s clash that he had been met with a text message from eight-time slam-winner Andre Agassi, who he credited with sparking his game into action.

“He’s going to bed now. That’s the last thing he sent me,” he said.

“He’s one of the most special people in my life. We started talking during Covid in 2020.

“He’s been one of the biggest parts in my rise. Just overall just as a tennis player, as a human being. We spend a lot of time together.