UFC history: Volkanovski wants KO in fight for No.1 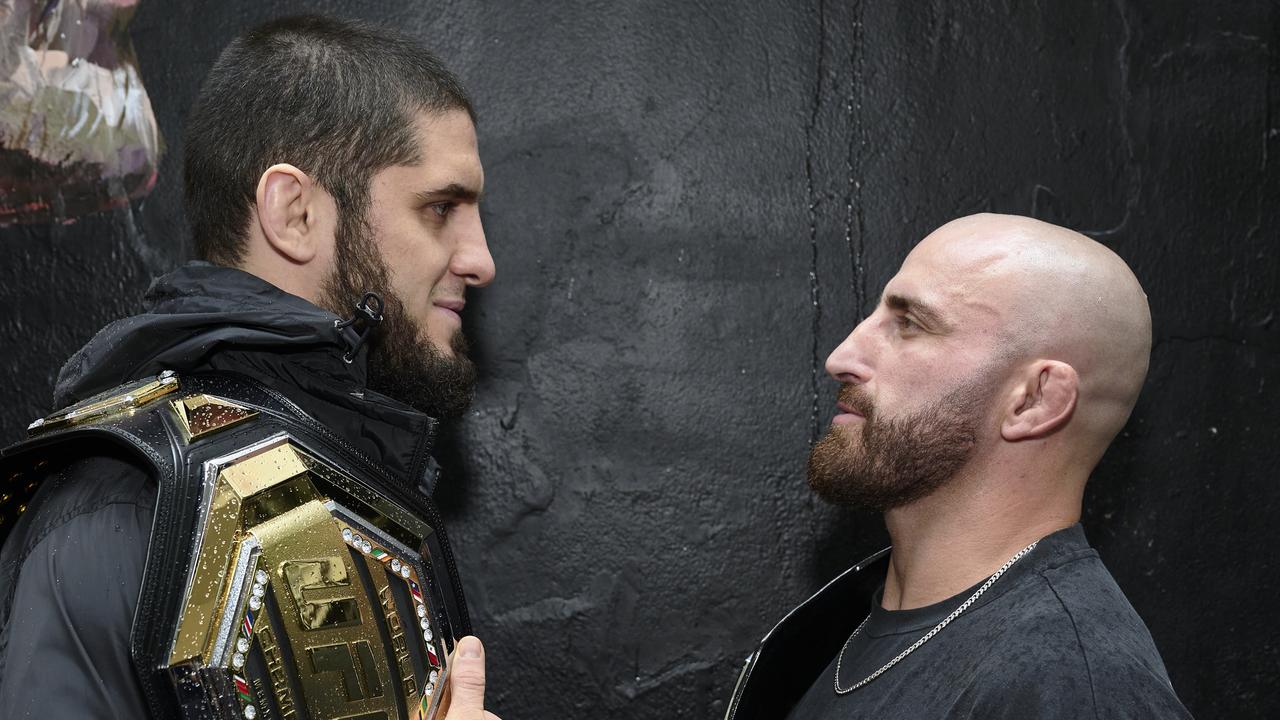 Featherweight champion Alex Volkanovski has vowed to prove the doubters wrong and create history by moving up a weight class and beating lightweight titleholder Islam Makhachev at UFC 284 in Perth next month.

It’s far from the first champion versus champion fight in the UFC, but it marks the first time the two highest ranked men’s pound-for-pound fighters have ever fought each other, after Volkanovski was promoted to P4P No.1 and Makhachev was named No.2 in November last year.

“This is it. This is the first time it’s ever been No.1 versus No.2,” Volkanovski told News Corp. “It’s never been done before.

“We’re making history, and me moving up and fighting the No.2 pound-for-pound guy just makes it even bigger.

“No one’s ever gone into a champ-champ fight against someone who was so highly ranked, and I can’t wait to get over there and prove the doubters wrong.”

Makhachev’s 10cm height advantage was evident when the pair faced-off in Sydney on Sunday, with Volkanovski installed as the big underdog with the bookies and written off by many MMA pundits.

But undefeated in 12 fights in the UFC, the Aussie is adamant that he has the skills to cause an upset.

“People are looking at the size difference and calling it a David and Goliath story, but all that just makes the win so much bigger,” Volkanovski said.

“He’s a good fighter, he’s got some good wins, but we adapt to different styles better than anyone. There are a lot of guys he’s faced that don’t know how to work out that puzzle.

Makhachev (23-1) has enjoyed a rapid rise up the UFC pecking order, proving his own doubters wrong with a clinical second-round victory over Charles Oliveira to claim the lightweight belt in October.

A protégé of Khabib Nurmagomedov, Makhachev has also spent time training with former UFC champions Daniel Cormier and Luke Rockhold in the US, and is confident of creating his own legacy by becoming the UFC’s pound-for-pound king.

“My last fight was for the belt, the next fight is for the rankings,” he told News Corp. “I’m going to be the best fighter of all – it means the world to me.

“It’s the dream of all fighters to become the world No.1, so I’m very excited.”

An elite grappler, three of Makhachev’s past four wins – including his title fight victory – have come via submission and he says his experience will be the difference.

“(Volkanovski) tried to bring some wrestling to his team to make his wrestling good but you have to wrestle all your life,” he said.

“This is not boxing or kickboxing. This is different. With wrestling, you have to do it your whole life.”

Asked how the fight will end, Makhachev promised another submission win, while Volkanovski is going for a knockout.

“He’s got a pretty big head,” Volkanovski quipped. “An easy target to hit.”