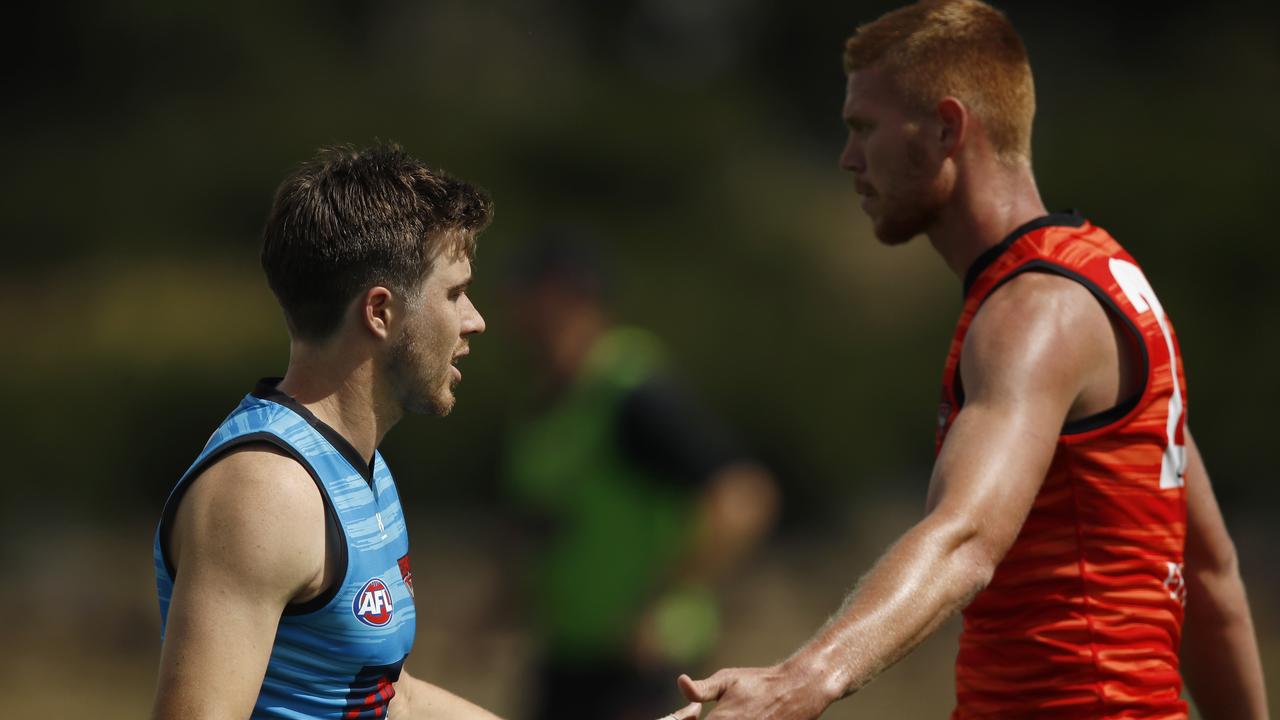 In another injury setback for the Bombers, a star best-and-fairest winner has hobbled off the track during match simulation.

Essendon key forward Peter Wright has hurt his calf in another setback to the Bombers’ key forward stocks.

Wright hobbled off midway through the club’s match simulation session with a calf complaint on Wednesday.

The club’s medical department have begun treating the goal kicker.

It is another unfortunate injury setback to Essendon’s forward setup as the club attempts to rise up the ladder under new coach Brad Scott.

Wright, who enjoyed a career-best year last season, is one of the club’s most important players.

New recruit Sam Weideman is also on light duties with a quad injury. News Corp released on Friday Elijah Tsatas will be sidelined for two months after tearing the meniscus in his knee.

Collingwood star defender Darcy Moore is confident he will be fit to play in round one as he opened up on the bone infection which put him in hospital late last year.

Speaking for the first time about the infection which delayed his start to the pre-season, the Magpies’ captaincy candidate said he was relieved to be back on the track and building up his training program after a “rough few months”.

Moore resumed running for the first time at training last week after it was discovered he had been suffering from osteomyelitis, an inflammation that occurs in the bone.

The 26-year-old revealed the infection had been discovered after he felt “irregular soreness” as he started to build up his off-season training.

Moore said he was fortunate the infection was detected early and treatment went smoothly.

“I have had a pretty smooth return the last couple of weeks since we’ve been back this year, so I’m just happy to be back running and moving and kicking footys again and hanging out with teammates,” Moore said on Monday.

“It’s an exciting time for me after a rough few months. (I’m) building really well, the physios, medical team, and conditioning team are all taking really good care of me and have a really solid plan to get back.

“But fortunately the medical team and staff in the hospital were really diligent and we were able to get a really early diagnosis, which was really accurate and then treatment pretty much went as smoothly as it possibly could.

“I’m very relieved and just happy to be out of hospital and running some laps at training again, it feels good.

“Obviously spending time in hospital is never a joy … having troubles with your health is never nice.”

Moore said he hoped to build towards a solid block of football training towards the end of the pre-season as he targeted the Magpies’ round one clash against Geelong at the MCG.

“(I’m) building up running and starting to build up some agility work as well and some football movement, so jumping, cutting and those sorts of things at high speed,” Moore said.

“That will be the thing that I build up slowly over the next few weeks and put it all together and get a solid football block in hopefully towards the end of the pre-season and be ready to go for the season.”

“I am (confident for round one). I’m feeling really good so far, but it’s still early days and more than anything (I’m) just happy to be back moving again and back around the boys.”

Moore’s comments came as Collingwood kicked off a three-day pre-season training camp in Lorne on Monday.

The All-Australian backman is considered one of the leading contenders to replace Scott Pendlebury as Collingwood’s next captain along with Taylor Adams and Jeremy Howe.

Moore served as one of Pendlebury’s three deputies last season alongside Adams and Howe after he was appointed to the vice-captaincy for the first time.

As the son of club great and former Collingwood captain Peter, Moore admitted it would be a “nice sentimental thing” if he was to follow in his father’s footsteps and be named skipper.

But Moore gave little away about his desire for the role when quizzed about it on Monday.

“It’s obviously something that has been spoken about a lot and we’re as excited as anyone for what the future holds for the leadership of the team,” Moore said.

“You develop really close bonds and lots of trust among those senior guys …. I think for us internally it is a little bit more about the collective of the senior guys of the team.

“You need all of them to be on board to drive the team forward. That’s certainly been Scott’s (strength) over nine years to empower others.

“It’s not about me, the club is going through a process to find the right person and the right leadership structure which involves people from all different parts of the organisation having a say and it’s a bigger decision than that.

“I think there is definitely a group of us who have all got the experience and the traits that are definitely capable of doing it, so we’ll see what happens.”

Pendlebury announced last month he was stepping down as skipper after nine years in the role – the club’s longest serving captain.