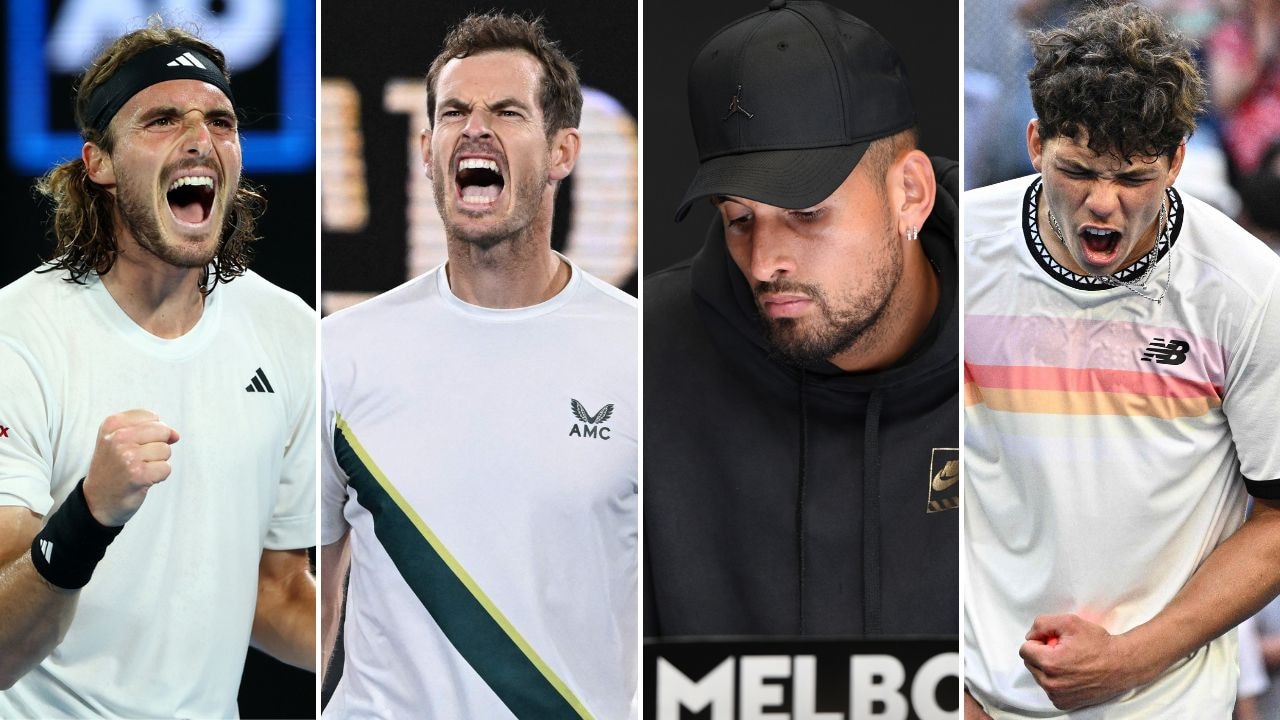 Should there be a curfew? Who has been the surprise packet? A handful of tennis greats have answered the big questions from the Australian Open.

With the biggest names in tennis hitting the court at Melbourne Park over the last 10 days, we hit up some legends of the game about the tournament’s biggest storylines.

SHOULD THERE BE A PLAY CURFEW?

MARCOS BAGHDATIS: How many times has it happened in the last 20 years? Trying to change something after two times? Shit happens. That’s how I take it. But at least you’re in the history books. Looking at it now, as a retired player, it’s been an honour to be in that match (that went until after 4.30am against Lleyton Hewitt in 2008). I went back to the hotel and people were coming down for breakfast. I know it sounds tough, and when you go through it you’re frustrated, but … it’s just a tennis match and you were part of it. If you see it from a tournament perspective … it’s tough also.

BARBARA SCHETT-EAGLE: I do believe some of the matches were finishing way too late. It’s the talk of the tournament. It’s talk among players and former players as well, (saying) ‘what can we do?’. We don’t want matches that finish at 3am. Either you stop at midnight, or you just put one night session on. I think it’s really tricky for players go to bed at 5am to stay in that time zone. It’s a disadvantage as well for the next match. There has to be something done.

TOMMY HAAS: Even when I came along to Indian Wells (as tournament director), we were looking at the same thing and talking about it. I’m sure every tournament does the same thing. Of course, the grand slams are a little bit different because the men play best of five. As a former player, you know if you’re scheduled third or fourth match during the day … you could play at 2pm or you could play at 6.30pm. You don’t really know. That’s the tough part as a tennis player, you just don’t know when you’re going to go on court. (Early morning finishes) happens, unfortunately, sometimes, but there’s also not really much that you can really do. What’s the best thing? Do you just not have night session anymore? Even then there is no guarantee that it doesn’t go until 1am in the morning.

RADEK STEPANEK: I don’t mind night sessions, but I don’t like early mornings. When I saw Andy (Murray) in here at 10am (after finishing his match at 4am) in the lockerroom, he couldn’t fall asleep, was walking with blisters everywhere … I have so much respect for him with what he’s done and what he showed here again when everybody told him they didn’t think he would be playing professional tennis. Huge respect to Sir Andy. But I’d prefer night sessions than early mornings.

BOB BRYAN: No, I don’t. I think if the matches go long, they go long. That’s how the schedule works and that’s how it’s always been. I really don’t think we do (need it). It hurt us when we were the last on and we had to play at 11am the next day. But with a day off with rest, it shouldn’t be too much of an issue.

DANIELA HANTUCHOVA: I think it’s special. Everyone remembers the 4am matches, and it’s hard for everyone. But at the same time everyone enjoys (them) as well, so I wouldn’t change it.

AGNIESZKA RADWANSKA: I remember playing so many night sessions, and it’s not helping. It’s not helping at all. There’s so much adrenaline and then you have to have a couple of hours until you fall asleep. So when you fall asleep around 6am, 7am – even 5am – I felt like I was just partying all night. Because I was just exhausted. I think the night session should start maybe a little bit earlier then there’s some normal hours they can finish. Or just have one match or something that’s going to go until maybe 1am maximum or even midnight.

WHAT HAS SURPRISED YOU THE MOST THIS AO?

MB: A lot of seeds are out and a lot of players out. The new generation is maybe stepping up, and when I say new, it’s the under 21s. It’s nice to see.

BB: It’s been riddled with upsets. It’s the first time in so many years that the number one and two seeds aren’t in the finals. There’s a lot of fresh faces, which I like to see. A lot of great storylines with Andy Murray and all the Americans. It’s been an exciting tournament.

BS-E: Andy Murray, he captured the first week. His comebacks, I mean four years ago I pretty much said goodbye to him. He comes back four years later after the surgeries, the metal hip and plays tennis like that, so that was a bit surprise to me.

DH: There’s been so many. I think the nicest surprise was Andy Murray and the way he was able to turn those matches around and recover … it was just crazy.

AR: Well, I think Andy Murray. He’s the champion of this tournament, definitely. I mean, seriously when you complain about a sore back or your arm is not working or you’re tired or something then you just have to shut up and watch Andy Murray. He’s an example for pretty much everyone, even for current tennis players. How to deal with everything and the hard work you have to do to be able to be out there.

WHO WILL FINISH THE YEAR AS WORLD NO. 1?

MB: (Stefanos) Tsitsipas. I was going to say Maria Sakkari, but it’s a bit tougher (for her). I want her to be. Iga Swiatek.

BS-E: I think Novak Djokovic. He’s top-10 with only playing 11 tournaments last year. He won Wimbledon without getting points. I think it’s his time. I still think Iga Swiatek will stay there. I can’t really see – maybe Jess Pegula – but (Swiatek) is so far ahead, so I still think she’s still the most consistent one.

TH: If Djokovic stays healthy, I don’t see how he’s not going to be No. 1. Obviously the one problem being that he still cannot come to the US. If he doesn’t play Indian Wells and Miami in March … I think they’re going to lift those mandates (for vaccination) in April. It would be nice to see if we can maybe lift those a little bit earlier and have him come to play. He wants to play, so we should give him the chance … it would be a disgrace if he wasn’t allowed to come to these events. But if he does play all of them, I think he’s the favourite to be No. 1 at the end of the year. But other guys like Tsitsipas, (Holger) Rune, (Carlos) Alcaraz, (Jannik) Sinner, these guys … so many storylines. Swiatek is such an all-round player. She wants it really bad. It will be interesting to see how she does defending all of these tournaments that she won last year. Sabalenka is such a big powerful player that can hit the racquet out of your hands. It’s going to be interesting to see.

BB: For the women’s, I think Iga Swiatek is going to be unstoppable for most of the year. On the men’s side, I think (Novak) Djokovic still has some good years ahead of him.

AR: I have no idea. This is the sport we all love to watch because it’s so unpredictable. Everything is open and we’re going to see a lot of different matches and different surprises. I’m not a fan of guessing, it’s so hard to see. We’ll see.

WHAT’S YOUR BIG PREDICTION FOR TENNIS IN 2023?

BS-E: I’ve only watched (Linda Fruhvirtova) a little bit, but it’s amazing. She could be a future 10-time grand slam champion, who knows? I haven’t seen her (15-year-old sister Brenda) at all, but they obviously want to do some major damage on the WTA tour together. They can practice together, they motivate each other probably as well, which is nice — we’ve seen that with the Williams sisters, how much that helped them develop. Maybe that’s the future for them.

SHOULD ON-COURT COACHING BE ALLOWED?

MB: I don’t know. I’m not for it, I’m not against it. I wouldn’t like the coach to come on-court, for sure, or sit on the court. But a bit of flexibility, some signs … it’s OK. It’s not bad, in a controllable manner, I wouldn’t mind it.

BB: I don’t think it should. I like the individual aspect of the sport. Your tennis IQ plays a big part and you have to figure things out for yourself when you’re out on the court.

MB: It’s the first time I’ve played with it, actually. It’s very weird. But something you can get used to.

DH: I think it helps, not to have any doubts in your head as players. I would’ve loved to have been around (for them).

HAVE YOU WATCHED ‘BREAK POINT’ ON NETFLIX?

BB: Oh yeah. I loved it. Especially the (Nick) Kyrgios episode, I loved the whole Fritzy (Taylor Fritz storyline) behind the scenes at Indian Wells and how he almost didn’t go out there. And then I loved the Uncle Toni-Felix French Open episode. The dynamic there was pretty interesting.