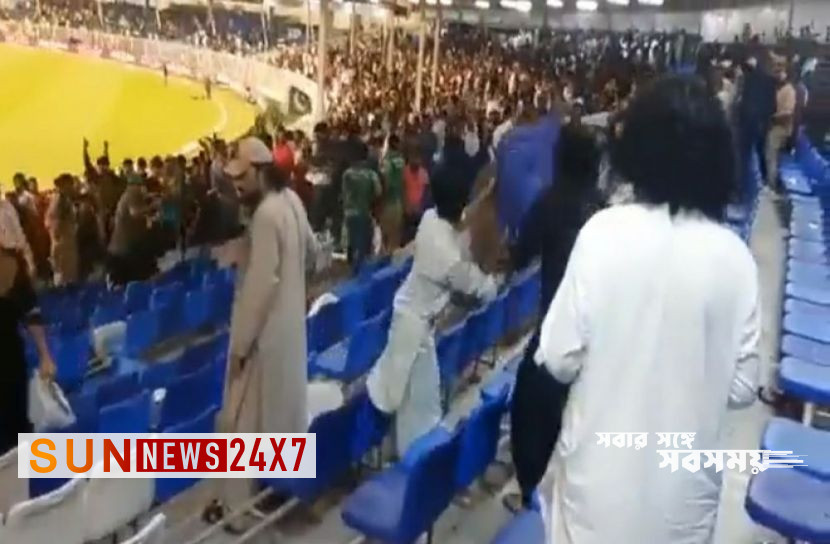 Sun News Desk: The excitement started in the field when Pakistani batsman Asif Ali was dismissed, Afghan pacer Farid Ahmed said something, Asif lost his temper and hit Farid with the bat.

That anger spread beyond the field. Afghan fans could not accept the last minute dramatic loss to Pakistan in a tight match. They attacked the Pakistani fans by uprooting chairs in the field.

The match between Pakistan and Afghanistan turned out to be the most important match of the Asia Cup. If the Afghans won the match, they would have survived, the fight to reach the final would have been between four teams.

Such a high-voltage match will not spread excitement, so what! The excitement is spreading! But so much, with which the relationship between the cricket fans of the two countries has become a snake.

In a video circulating on social media, Afghanistan fans attacked Pakistani fans inside the stadium after Rashid Khan lost the match.

In the video, Afghan fans are seen throwing chairs at the stadium towards Pakistani fans. With which the cricket related people of the two countries are stuck.

Former Pakistan pacer Shoaib Akhtar shared the video of the attack by Afghan fans on Twitter and tagged Shafiq Stanikzai and wrote, ‘What are Afghan fans doing? They have done this many times in the past. It is a game and should be conducted in the right mood. Shafiq Stanikzai If you want to progress in the game, you fans and players have to learn a few things.”

Shafiq Stanikzai, the former chief executive of the Afghan Cricket Board, replied to Shoaib’s tweet saying, ‘You can’t stop the emotions of the fans. These incidents have happened many times in world cricket. You can rather ask Kabir Khan, Inzamam Bhai and Rashid Latif, how we viewed him. My advice would be, don’t involve the race in any comment.’