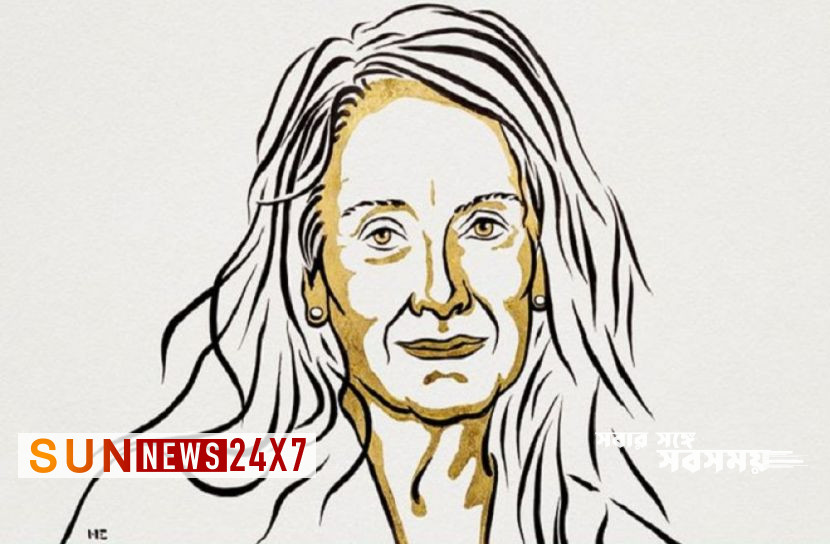 International Desk: This year the Nobel Prize in Literature was awarded to French author Anne Arnaux.

Read more: I am ready to leave

On Thursday (October 6) at 5 pm Bangladesh time, the Royal Swedish Academy of Sciences announced the name of this year’s Nobel Prize in Literature in Stockholm.

The 2022 Nobel Prize in Literature was awarded to Annie Ernaux for her writing, consistently and from different angles, highlighting powerful inequalities related to gender, language and class, the Royal Swedish Academy said. With courage and clarity and incisiveness, he uncovered the roots of personal memory, isolation and collective restraint, the Nobel committee said. As always, this time too he will get 1 crore Swedish kroner.

Annie Arnaux was born on September 1, 1940. His literature is mainly autobiographical and related to sociology. She is the 17th woman to win this award.

Arnaux says writing is a political act, opening our eyes to social inequality. For this purpose he uses his own language as a ‘knife’, which helps to tear the veil of his imagination.

Earlier, the 2021 Nobel in Literature was won by Tanzanian novelist Abdulrazak Gurnah. He received this award for his fourth novel called Paradise. The previous year he received the American poet Lewis Gluck.

The announcement of the names of the 2022 Nobel Prize winners in various categories has started from last Monday (October 3). The name of the Nobel laureate in medical science was announced on the first day. Swedish scientist Suvante Pabo received the Nobel Prize in medicine this year. The award was given to him for his discovery of the genome of primitive man and his discoveries related to the genome of human evolution.

The name of the Nobel laureate in physics was announced on Tuesday. This year the award was won by French scientist Alain Aspect, American scientist John F. Klauser and Austrian scientist Anton Zellinger. The award was given to them for ‘experiments with entangled photons, establishing the violation of the Bell inequality and playing a pioneering role in quantum information science’.

Then on Wednesday, the names of the Nobel laureates in chemistry were announced. He won this award as a scientist in 2022. They are Carolyn R. Bertozzi, Barry Sharpless and Denmark’s Morten Meldal. The award was given to Barry Sharpless and Morten Meldahl for bringing chemistry into the functional era and laying the foundation for click chemistry. Moreover, Caroline Bertozzi took click chemistry to a new level, using it in living organisms. Also its bioorthogonal reactions are now contributing to cancer treatment.

Read more: Gold worth crores was found in the dustbin

Incidentally, according to a will made by the Swedish scientist Alfred Nobel in 1895, the Nobel Prize was introduced. The first prize was awarded in 1901. The awards are presented in five categories to individuals and organizations around the world for successful, unique research, innovation and humanitarian activities. The subjects are Physics, Chemistry, Medicine, Literature and Peace. Although the Nobel Prize in Economics has been awarded since 1969.