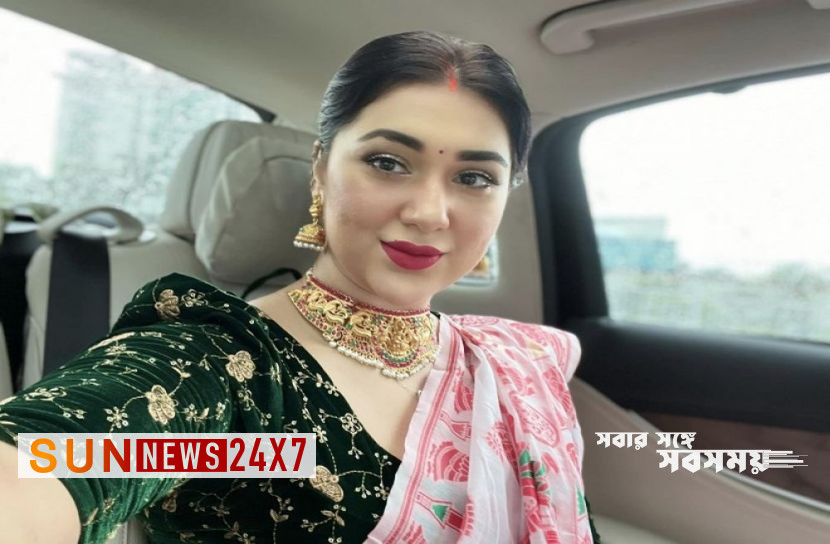 Sun News Desk: Popular actress Apu Biswas who is famous as dhalwood queen. This time, the cinema is abuzz with rumors of the actress’s marriage.

Read more: Lean to get the soles of your feet right

He was in Kolkata for the entire duration of Durga Puja. Amidst the joy of this festival, there is a buzz about him again. The reason for this, of course, is he himself. Apu recently posted three pictures on his verified Facebook page a few days ago. Where vermilion can be seen on his sinthi.

Apu participated in the Sindoor game during Puja celebrations in Calcutta. In some TV interviews given at the same time, vermilion was seen in her sinthi. That’s why the rumor started, ‘But is Apu Biswas married again!’

Not only that, the Indian media Hindustan Times Bengali said ‘Even after the divorce with Shakib Khan, Apur Sinthi’s vermilion in Vijayat, secret marriage again?’ The headline also published the news on October 6.

However, dismissing these rumours, Apu Biswas wrote on his verified Facebook page on Sunday night, ‘No one will be confused by seeing vermilion in Sinthi, that morning I had a photo shoot, then there was a vermilion game, you watch Bengali films, stay with Bengali cinema.’

Read more: Looking for a man like Salman Khan

Read more: Mahiya Mahi is not for YouTubers

Incidentally, Apu Biswas made his debut in the film industry in 2006 by acting in the film Tomorrow Morning directed by Amjad Hossain. She acted in the 2006 film Koti Takar Kabin directed by FI Manik as the lead opposite Shakib Khan. Apu Biswas acted opposite Shakib Khan in more than 72 films. During his career, he earned a Bacchus Award and was nominated six times for the Merrill-Prothom-alo Award.