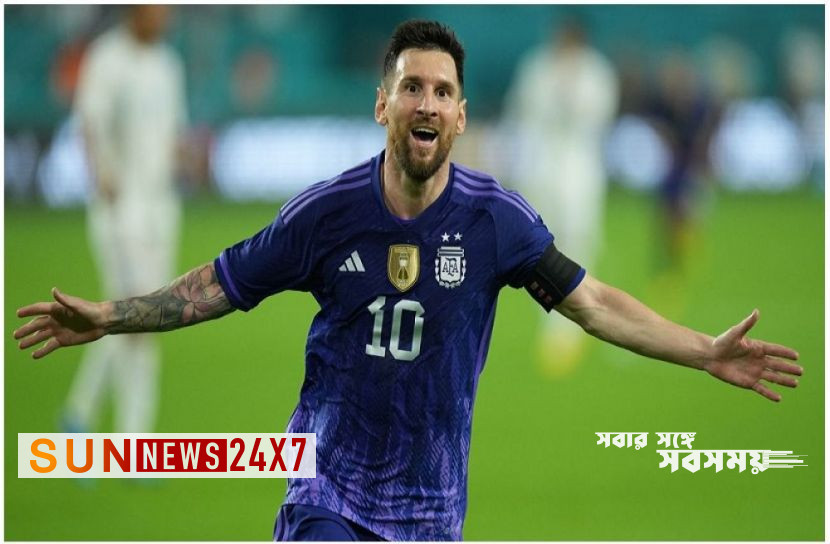 As a result, despite scoring 4 goals in the first half, Lionel Messi could score only one more goal in the second half. Nevertheless, Argentina completed their last warm-up match before the World Cup with a 5-0 thrashing of the UAE in the end.

Lionel Messi’s team take on the Emirates on Wednesday (16 November) to warm themselves up ahead of the World Cup. World Cup super favorites Argentina raced to a 4-0 lead in the first half against hosts United Arab Emirates at Abu Dhabi’s Mohammed Bin Zayed Stadium.

Angel Di Maria scored a brace in the first half. Lionel Messi and Julian Alvarez scored one each of the remaining two goals. Joaquin Correa scored the only goal of the second half.

Di Maria had a minor injury problem. It was to be seen whether he could enter the field or not. Although he was fielded, Paulo Dybala was not kept in the squad for today’s warm-up match.

The warm-up match against UAE has started at 9:30 pm Bangladesh time. Even though it is a preparatory match for the World Cup, the audience cannot sit at home in the match that Messi is playing. Mohammed Bin Zayed Stadium was filled to the brim.

Julian Alvarez scored in the 18th minute to give Argentina the lead. Alvarez put the ball into the UAE net with a superb right-footed shot from the center of the box after receiving the ball from Lionel Messi.

Read more: Enchanted teammates with the magic of Neymar!

Di Maria doubled the lead in the 25th minute. He received the ball from Marcos Acuna inside the box. He bypassed the defenders and the goalkeeper and put the ball into the net with a gentle touch of his left foot.

Goal again in 36 minutes. Di Maria scored again this time. The Juventus star scored a left-footed shot from inside the small box after receiving the ball from Alexis McAllister.

Lionel Messi scored in the 44th minute. He received the ball from Angel Di Maria’s pass. Messi took the ball inside the box and took a right foot shot. Argentina and the United Arab Emirates went into the first half break with a 4-0 margin.

At the beginning of the second half, the United Arab Emirates almost wrapped the ball in Argentina’s net. But unfortunately, the goal was not scored. In the 48th minute, Harib Abdullah Suhail broke through Argentina’s defense with a great left-footed shot. The ball also evaded goalkeeper Emiliano Martinez. But could not dodge the post. The ball bounces off the top bar.

Fabio Lima gets the ball back. He beat defender Abdallah Ramadan. He took a shot that bit the ground with his left foot and goalkeeper Martinez jumped to save Argentina.

Trailing 4-0, the United Arab Emirates played under pressure in the second half. But Argentina was careful not to get injured in any way. Correa scored the fifth goal in the 60th minute. Correa received the ball in the box from Rodrigo de Paul and fired a right-footed shot into the net.

Read more: Argentina are not favourites

Messi got a free kick in the 78th minute. His left foot angle shot was excellent. But did not find the net. Goes out.

Even in the 81st minute, the United Arab Emirates missed a chance to score. At this time, the goalkeeper Martinez saved the team with extraordinary skills. Ali Saleh took a shot from the middle of the box after receiving the ball from Majid Rashid. But with Martinez, the ball will not enter the net. So it happened.

In the end, the Latin American country Argentina completed preparations before the World Cup with a 5-0 victory.