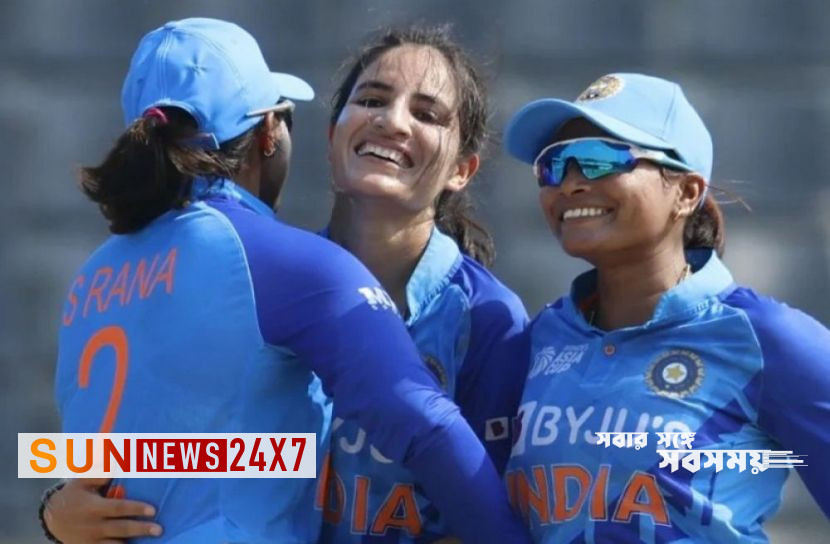 Sri Lanka lost 7 wickets for 25 runs at the beginning of the match by the Indian bowlers. The Lankan batsmen were able to score only 65 runs for 9 wickets on the back of No. 10 batsman Inoka Ranaweera’s unbeaten 18 runs.

In reply, the girls of India beat the modest target of 66 runs after losing only 2 wickets with 69 balls remaining.

As a result, India became the champion of this year’s women’s Asia Cup.

Harmanpreet Kar’s team will face Sri Lanka in the final at Sylhet International Stadium on Saturday.

Chasing the target of 66 runs, Smriti Mandhana played a stormy innings of 51 runs off 25 balls. Smriti scored 25 runs in just 3 overs in the opening partnership with Shefali Verma.

Ranawira sent back Shefali on the 4th ball of the 4th over. Shefali returned with 5 runs from 8 balls. In the next over, Dilhari brought back Jameema Rodriguez for one down. Jamie could not score more than two runs.

At that time, India needed 31 runs from 99 balls to win. Smriti took it easy with skipper Harmanpreet.

Read more: Calls for an apology from Pakistan

Smriti hit Ranasinghe for a six off the third ball of the ninth over to take the team to the port of victory. Captain Harmanpreet remains unbeaten on 11 runs from 14 balls.

Earlier, five-time finalist Sri Lanka could not stand up to India’s bowling cannon from the start.

Chamari Atapattu’s team lost 4 for 9 runs and 8 wickets for 32 runs.

Among the Lankan batsmen, only Osadi Ranasinghe and Inoka Ranaweera have reached double figures. Ranasinghe was dismissed for 13 runs off 20 balls. And in the end, the number ten batsman Inoka made an unbeaten 18 off 22 balls to save the team from further embarrassment.