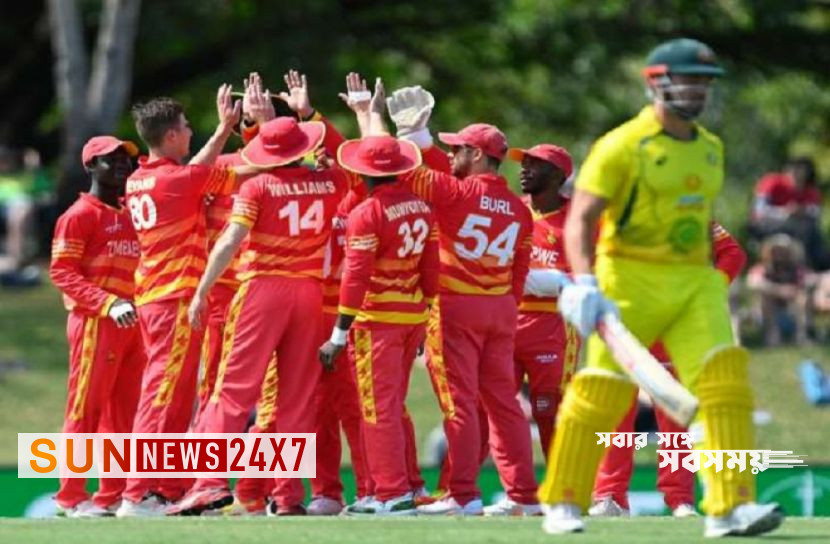 Sun News Desk: The Zimbabwe cricket team gave birth to an incredible incident in the World Cup Super League match. Zimbabwe proved that by defeating the mighty Australia in their own field. Regis Chakavar team won by 3 wickets in the last match of the series on a mission to avoid a whitewash.

The bowlers, especially Ryan Burle’s spin, had already paved the way for Zimbabwe to make history by restricting Australia to 141 runs. Shaky batting was a cause for concern, but in the end it was visitors Zimbabwe who had the last laugh. The team made history by winning by 3 wickets. Losing Bangladesh in the ODI series was not a ‘storm’ at all.

This is the first time in their history that Zimbabwe has won an international match against Australia on Australian soil. They could not compete against the Aussies in any of the 15 matches played before. This time the Zimbabweans won the match by wrapping up the hosts for 141 runs.

Not only that, Zimbabwe won 21 years against any opponent on Australian soil. They last beat West Indies on Australian soil in 2001. This time, the team that is in the Super League made a new history by losing the hosts.

Zimbabwe’s victory is a big loss for Australia. So far in the Super League, they have won 90 points in 15 matches of five series. Their position is number seven. On the other hand, Zimbabwe is second from the bottom with 45 points after winning only four matches in seven series.

Zimbabwe’s bowlers did the bulk of the work for the win, restricting Australia to just 141 runs. Zimbabwe had a confident start as they chased the runs later. Losing 5 wickets for just 77 runs, the visitors fell into danger. However, captain Chakava led from the front. He was accompanied by Tony Munyonga and Ryan Burl.

Read more: The US is arming Taiwan

At the other end, even though the teammates left, Chakava left the field with a strong bat to ensure victory. The Zimbabwe captain remained unbeaten on 37 off 72 balls. Right-arm pacer Josh Hazlewood took three wickets for Australia.