Bangladesh gave a target of 138 runs 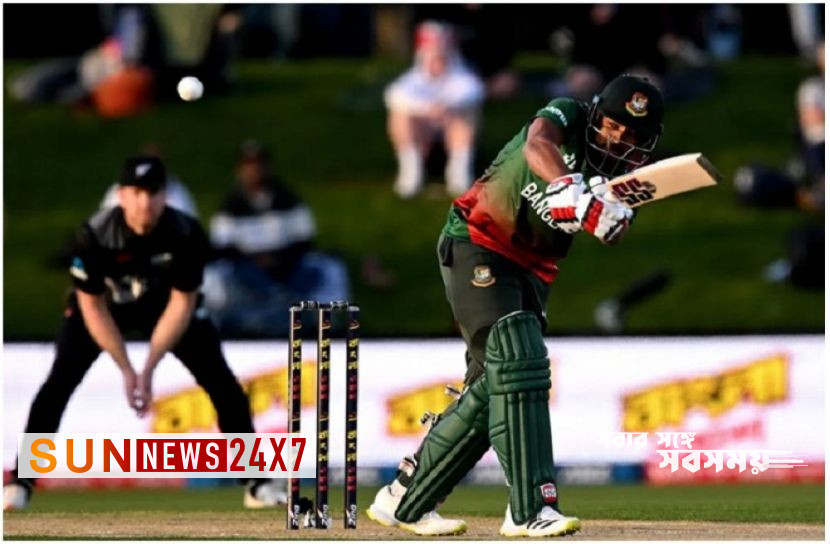 Sports Desk: The visiting Bangladesh batsmen managed to set a target of 138 runs against the hosts New Zealand. The Tigers could not extract any runs from the Kiwi bowlers. Shakib-Afifa are dead-headed for runs on the wicket.

Read more: New Zealand was blown away by Pakistan

Before the match, New Zealand captain Kane Williamson invited Bangladesh to bat after winning the toss at Hagley Oval in Christchurch.

Nazmul Hossain Shanto, who came to open instead of Sabbir Rahman, scored the maximum 33 runs for Bangladesh. He managed to hit only 4 boundaries after playing 29 balls. Afif Hossain Dhrub was dismissed after scoring 24 runs off 26 balls. Shakib Al Hasan scored 16 runs off 16 balls.

Even if the Bangladeshi batsmen hit sixes, they stay away, the ball cannot cross the 30 yard boundary.

Mehdi Hasan Miraj lost his partner Sabbir Rahman during the formation of the XI. The XI was formed excluding Sabbir. He is losing his effectiveness as a makeshift opener day by day. It was more evident against New Zealand.

On the second ball of the second over of the innings, Tim hit Southee for a great boundary. The next ball is the dot. After that, he raised the ball in the sky. He was easily bowled by Adam Milne at mid-on. As a result, Mirage got out with only 5 runs in 5 balls, the team was 12 runs behind.

Nazmul Hossain Shanto, who came to the team instead of regular opener Sabbir, was with Miraj today. He paired up with Liton Das after Miraj got out.

After losing Mehdi Hasan Miraj, it was necessary to prevent a quick fall of wickets. Nazmul Hossain Shanto and Liton Das did that job fairly well. Made a pair of 41 runs. But there was an opportunity to take the pair to a slightly more respectable place; But Liton could not.

Liton Das hands the return catch to Mitchell Besrowell. 15 runs off 16 balls was the death of a promising innings.

Nazmul Hossain Shanto gave the last ball of the 9th over a catch on the boundary line. Isha Sodhi was the bowler. Shant wanted to hit a six over long on. But the ball went straight to Mark Chapman. He got out after scoring 33 runs off 29 balls. Hit 4 boundaries. There are no sixes.

Shakib Al Hasan dropped from three to bat at number seven. A few runs can be added at the last minute if Mere-Koot. But the run doesn’t come anymore. With 16 runs off 16 balls, he departed with a catch in the hands of Guptill from Southee. Taskin Ahmed got out after scoring 3 runs in 2 balls.

At the last moment, Nurul Hasan Sohan tried to get up a little. In this small innings of his, the score was a bit challenging. He scored 25 runs off 12 balls.