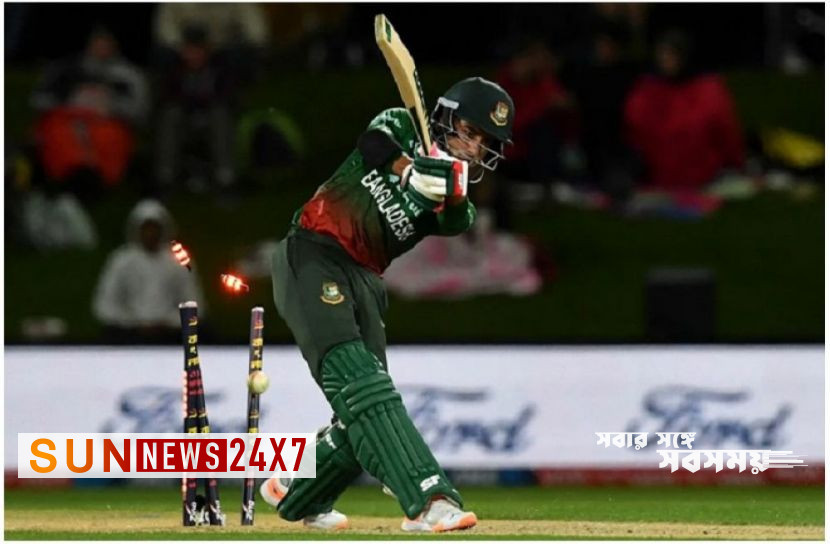 Sports Desk: The visiting Bangladesh suffered an easy 8-wicket defeat in the second match of the Banglawash tri-series against hosts New Zealand.

After losing the toss, Bangladesh scored 137 runs for 8 wickets in the scheduled 20 overs at Hagley Oval in Christchurch.

Chasing a target of 138 runs, the host Kiwis scored 142 runs for the loss of 2 wickets with 11 balls to spare.

Sohan left the field unbeaten on 25 runs off 12 balls. However, the maximum 33 runs for the Tigers came from the bat of Nazmul Hossain Shanto, who got a chance in place of Sabbir Rahman. Although Shanta played 29 balls to score this run.

Apart from these two batsmen, Mirage with 5 runs and Shakib with 16 runs can touch 100 strike rate. Among the other batsmen, Afif scored 24 runs off 26 balls and Liton scored 15 runs off 16 balls. Tim Southee, Mitchell Bracewell, Trent Boult and Is Shodhi took 2 wickets each for the Kiwis.

New Zealand lost wickets in the Powerplay as they chased down the target. Finn Allen returned for 16 runs off Shariful. Devon Conway-Kane Williamson added 85 runs for the second wicket to take control of the match.

Read more: It is a moral duty to help Pakistan

Captain Williamson scored 30 runs off 29 balls with a catch off Hasan Mahmud. Then Conway did the rest with Glenn Phillips.

The red-green bowlers have bowled well enough by keeping the line-length right. But that was not enough to win the match today.