Big win for the Tigers 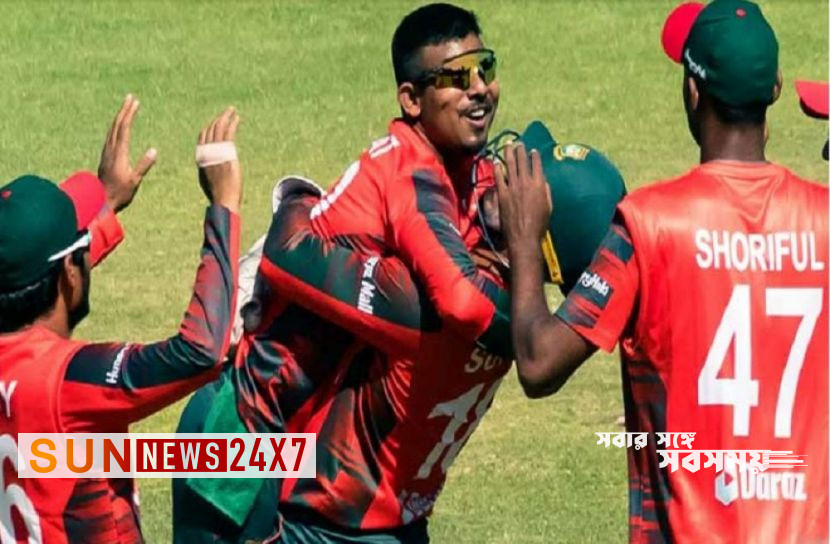 Sun News Desk: The Tigers leveled the series with a big win of 7 wickets. Bangladesh overcame the target of 136 runs given by the hosts with 15 balls in hand. With the win, the visitors returned to a 1-1 tie in the three-match series.

Chasing the target of 136 runs, Bangladesh got off to a flying start with the bat of Liton Das. The visitors scored 53 runs from the first 6 overs or powerplay.

In the fifth over of the Bangladesh innings, young opener Munim Shahriar was bowled for only 7 runs by Richard Ngaraver. After scoring 4 runs in the first match of the series, he failed to touch double figures in this match as well.

Munim quickly returned, but Liton continued to score runs at a blistering pace with Enamul Haque Vijay. He scored 56 runs off 33 balls with 6 fours and 2 sixes before being trapped leg before by Williams in the last ball of the ninth over.

Vijay also took the way to Sajghar after 3 balls of Liton Fera. He was dismissed by Sikandar Raja after scoring 16 runs off 15 balls.

Earlier, Zimbabwe won the toss and went to bat. The start of the innings was not good. Mosaddek hit twice in the first over. First return Regis Chakavaka. The opener returned before opening the run book. On the last ball of the over, Madhevere was caught by Mehdi at cover point while driving the ball outside off.

Host captain Craig Ervin won the toss and elected to bat first in the second T20I of the three-match series at the Harare Sports Club on Sunday (July 31).