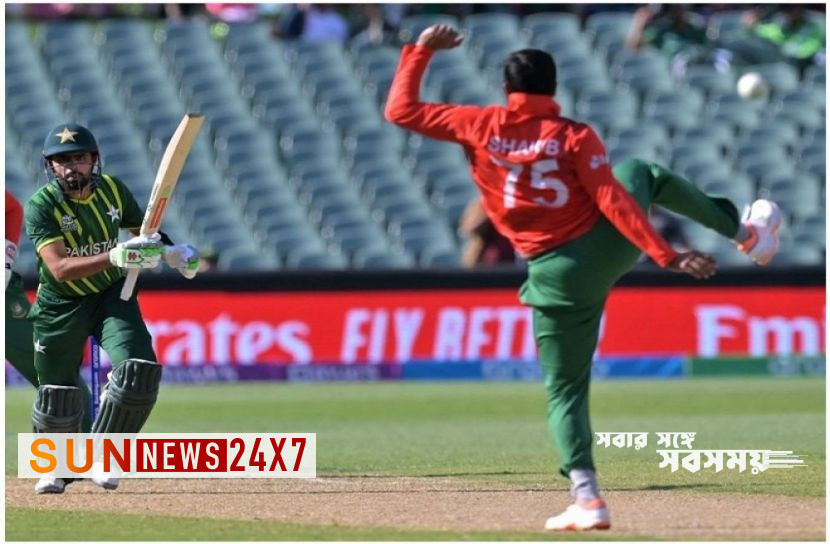 Sun News Desk: A flop with the bat after a great start. Then the bowlers with the small capital of the fight at the beginning of the catch drop! Well, this is how the T20 World Cup of Bangladesh ended. Pakistan entered the semi-finals of the World Cup after defeating the Tigers by 7 wickets.

But the name of Bangladesh could have been in the last four. The stage was prepared by the Dutch. Tigers could not shine on that stage on Sunday. At the beginning, Bangladesh won the toss and scored 127 runs in 20 overs losing 8 wickets on the green carpet of Adelaide. In reply, Pakistan lost 4 wickets in the 18th over and entered the semi-finals.

Chasing a target of 128 runs, Pakistan won by 5 wickets in 18.1 overs. Shaheen Shah Afridi made a big contribution in restricting Bangladesh to 127 runs for 8 wickets. This Pakistani pacer is the man of the match with 4 wickets for 22 runs in 4 overs.

With this victory, Pakistan secured their place as the second semi-finalist from Group-2 with India with 6 points from 5 matches. India will take on Zimbabwe at 2:00 PM in the battle for the top spot. Rohit Sharma is second in net run rate with equal 6 points. India became the first team from this group to qualify for the semi-finals after losing to South Africa.