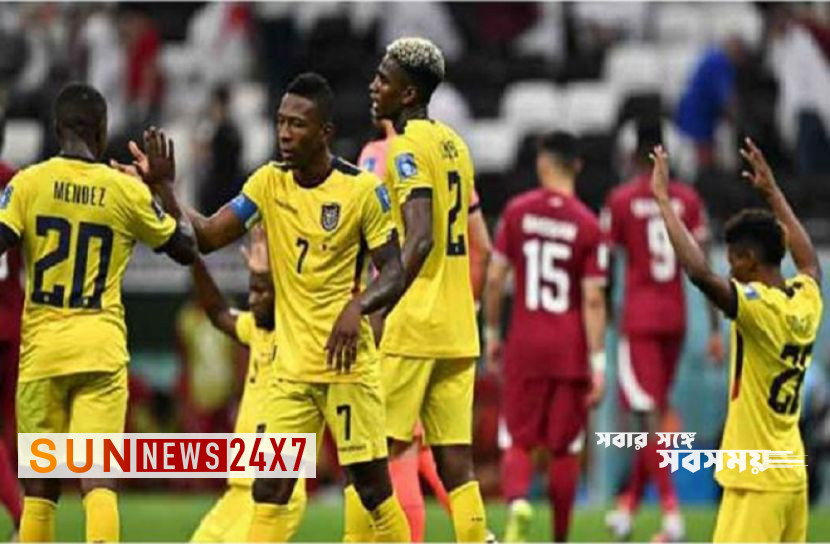 Sports Desk: It is the first time in the 92-year history of the World Cup that a host country has lost its opening match. Qatar broke history in their first match against Ecuador, losing 0-2.

The opening match of the World Cup started at Al Bayat Stadium on Sunday (November 21). The Latin American country put the ball in the net of the hosts in 3 minutes of the match. However, after seeing the goal of captain Valencia on VAR, the referee canceled it for offside. An occasion of joy at the Al Bayat Stadium immediately. Qatar has 50,000 supporters.

That roar didn’t last long. In the 15th minute, Ecuador scored a goal. The keeper couldn’t grip the extended through ball from midfield. The referee whistles for a penalty for obstructing the Ecuadorian forward. Valencia did not make a mistake to score from the penalty.

Valencia doubled the gap in the 35th minute of the match. A cross from the right edge jumped into the box and scored with a header. After this goal, Qatar fell behind in the match Ecuador was ahead in all aspects of ball possession and attack. It became clear as the match progressed that the Asian champion team was behind in skills and tactics.

Qatar had only two chances in the entire match. Most of the 90 minutes were played in Qatar’s half. Many Qatari fans left the stadium midway through the second half.

Both teams made a lot of fouls on the day. Ecuador made 15 against Qatar’s 15 fouls. Among them, 4 footballers from Qatar and 2 from Ecuador saw yellow cards.

There was a lot of controversy about hosting the World Cup in Qatar from the beginning. The country completed all the preparations for a successful event, dismissing all criticism from the West. But just three days before the games were to take place, a serious complaint was made against Qatar. Amjad Taha, regional director of the British Center in Saudi Arabia and a political expert, accused Qatar of paying $7.4 million in bribes to eight Ecuadorian footballers to lose the match. However, by blowing those rumors, Ecuador won their tournament by defeating Qatar.