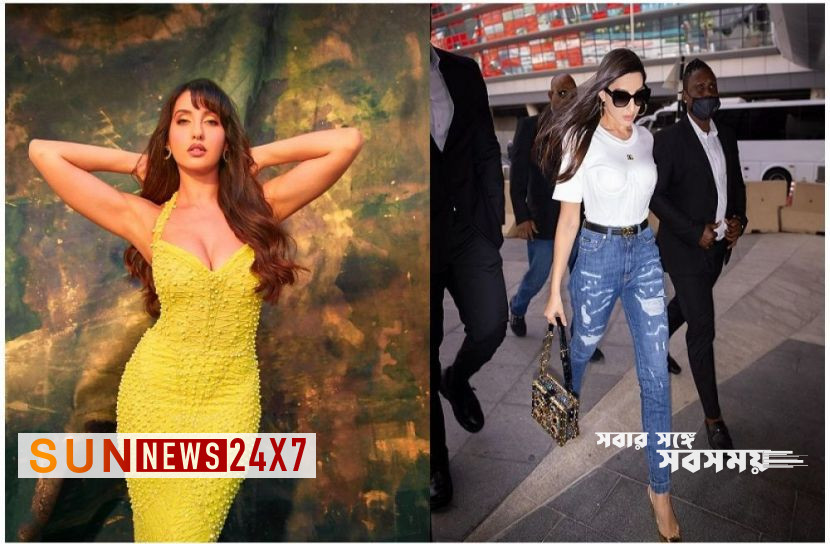 The actress arrived at Hazrat Shahjalal International Airport on Friday (November 18) at 1:20 PM.

The ‘Global Achievers Award 2022’ will be held at International Convention City Bashundhara (ICCB) in the capital. The program will start at 6:30 pm. The gates will open for visitors at 4 pm. Moreover, Nora Fatehi will also participate in the shooting of the documentary.

Visitors can also enjoy the program by registering on spot. It is said that Bangladeshi stars will also participate.

Nora Fatehi was taken to La Meridien Hotel from Hazrat Shahjalal International Airport. He will take part in the evening program after resting there.

On Thursday (November 17) night on Facebook Live, Mrittik said, “Foreign stars come to various award shows. However, I think this is the first time that such a big organization has been organized with all the concerned ministries and departments of the country through such a woman entrepreneur.

Nora Fatehi was born on February 6, 1992. She is a Canadian dancer, model, actress and singer.

Nora comes from a Moroccan-Canadian family and grew up in Canada. In various interviews, he called himself ‘Indian at heart’. He made his Bollywood debut with Roar: Tigers of the Sundarbans.

Read more: Tamannaah Bhatia on the verge of marriage!

He gained popularity by performing item songs in the Telugu films Temper, Baahubali: The Beginning and Kick 2.

In 2015, she was a contestant in Bigg Boss and left the competition on the 84th day.

In 2016, she participated in the dance reality television show Jhalak Dikhil.

He made his film debut by acting in the Bollywood film Roar: The Tigers of the Sundarbans. She then performed an item song in Puri Jagannath’s Telugu film Temper.

He starred in Emraan Hashmi’s 2015 film Mr. X played a special role. He then performed item songs in the films Baahubali: The Beginning and Kick 2.

In December 2015, he entered as a Bigg Boss contestant with ‘wild card’. Lasted 3 weeks in the competition. He was one of the contestants of Jhalak Dikhhla 2016. In 2016, he acted in a film titled My Birthday Song.

In February 2019, she signed a deal with T-Series to star in the company’s upcoming films, music videos, web series and web movies.

Although Nora Fatehi’s mother tongue is English, she can speak Arabic, Hindi, and French.