Fortune has not changed despite the change of captain 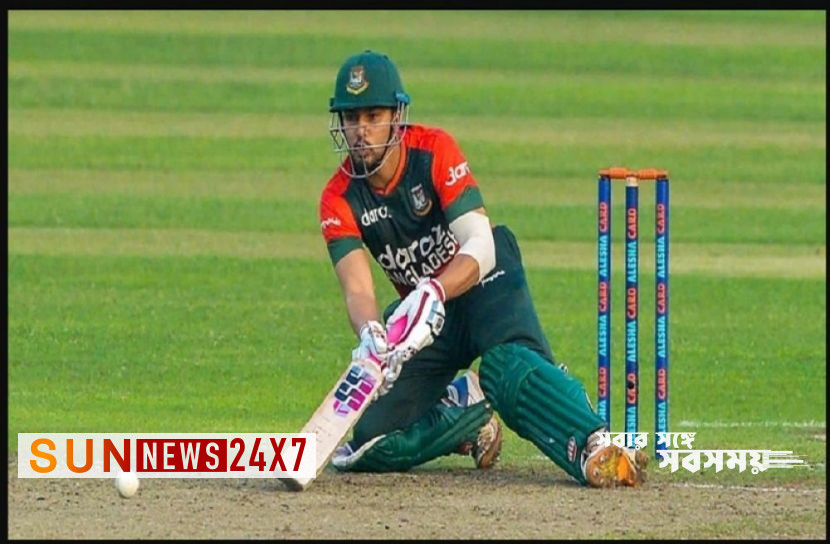 Sports Desk: Starting from the Super Twelve phase of the last Twenty20 World Cup, till now Bangladesh team has won only 1 game after playing 12 matches in this format. To break the cycle of defeat, Nurul Hasan Sohan was given a new responsibility by changing the captaincy in the tour of Zimbabwe. Tigers lost the first match of the 3-match series despite being a weak team.

The hosts lost 3 wickets in Sikandar Raja’s devastating fifty to get the Bangladesh team who forgot to win to 205 runs. Chasing 206 runs, Bangladesh’s innings stopped at 188 for 6, even though they ran at an even pace at the beginning. The visitors lost by 17 runs. As a result, Zimbabwe took a 1-0 lead in the series.

Bangladesh team lost opener Munim Shahriar in the chase for the target. In the second over of the innings, the youngster, who was wandering in the circle of failure, took a catch at point. He scored 4 runs from 8 balls. Overcoming that shock, the visitors scored 60 runs in 6 overs of the power-play with the bat of Liton Das and Enamul Haque Vijay. However, these two got confused in the seventh over of the innings.

Liton Kumar Das takes an easy catch at short fine leg off Williams. But Ngarava threw away while celebrating. Liton walked towards the dressing room without understanding. Meanwhile, Ngarava sent the ball to Williams on the non-strike edge. Williams immediately broke the wicket. He returned with 32 runs off 19 balls with 6 fours.

Vijay came down to play 27 balls and was dismissed for 26 runs. Afif Hossain quickly returned to score 10 runs off 8 balls.

However, Nazmul Hossain Shanto played at one end and kept the team in the game by forming a 21-ball 40-run partnership with Sohan. Shantar’s bat stopped in the 16th over of the innings. He scored 37 runs off 25 balls with 3 fours and 1 six.

Losing 5 wickets for 146 runs in 16 overs, Bangladesh needed 60 runs off 24 balls to win. At that moment, Sohan raised a storm with his bat and provided some hope.

However, when Mosaddek Hossain got out with 13 runs off 10 balls, the new captain’s unbeaten innings of 42 runs off 26 balls did not work. Sohan’s innings of 1 four and 4 sixes only reduced the margin of defeat.

Bangladesh’s innings stopped at 188 after losing 6 wickets at the end of scheduled 20 overs. Zimbabwe went ahead in the series by winning by 17 runs.

Zimbabwe did not start their innings well after winning the toss and batting at Harare Sports Club ground. In the third over of the innings, Bangladeshi pacer Mustafizur Rahman returned opener Regis Chakava. Chakava blasted a fuller delivery along the stumps. But Nazmul Hossain palmed it at mid-wicket. Chakava scored 8 runs from 11 balls.

After scoring 43 in the powerplay, the hosts lost another opener, Craig Irvine, on the first ball of the seventh over. Irvin wanted to play the on-side by going on the back foot to Mossadegh’s quicker delivery.

But the ball missed the bat and broke the wicket. He scored 21 runs off 18 balls. For the third wicket, Wesley Madhevere and Shaun Williams made a partnership of 56 runs off 37 balls.

Mustafiz stopped Williams storming with the bat. He scored 33 runs off 19 balls with 4 fours and 1 six. After losing 3 wickets for 99 runs, Madhevere continued the storm with the bat with Sikandar Raja.

He brought up his half-century off 37 balls with 6 fours. Raja also did not go less, in a more aggressive role, arranged four-six flowers. The right-handed batsman completed his fifty in just 23 balls with 5 fours and 3 sixes.

In the last over, Madhevere went up with an injury while scoring 67 runs off 46 balls. Raja remains unbeaten on 65 runs from 26 balls in a devastating batting. Where he hit 7 fours and 4 sixes. At the end of 20 overs, Zimbabwe lost 3 wickets and scored 205 runs on the scoreboard.