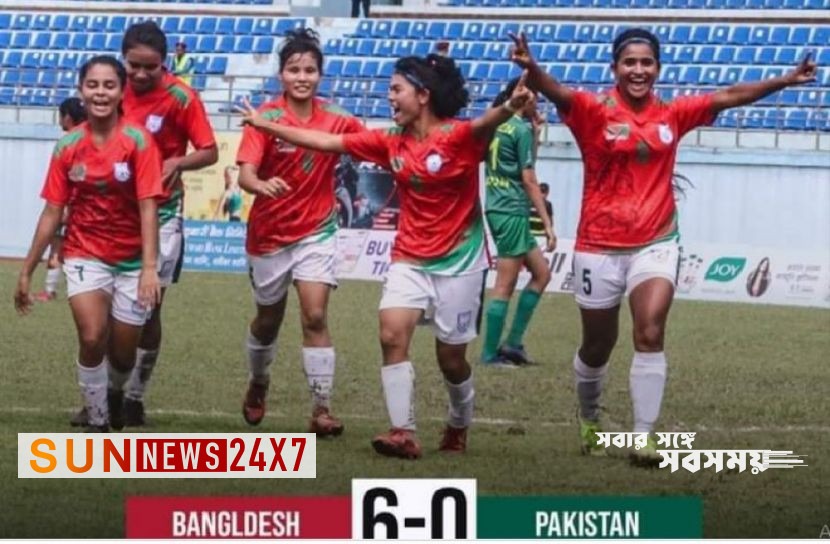 Sports Desk: Bangladesh played great against Pakistan girls in SAFF Football Championship. Bangladesh beat Pakistan by 6 goals. Sabina, the captain of the Bangladesh team, scored a hat trick. With this victory, Bangladesh confirmed the semi-finals of the SAFF Championship.

Read more: The mosque of 120 years ago woke up

Bangladesh took the lead at the beginning of the game. In the third minute, after taking the ball from throwing and crossing the two, Sabina’s shot into the box was returned by the Pakistani defender, and Monica, who was standing in the gap, got the ball. His perfect shot from the right corner went into the net.

Sirat Jahan Swapna doubled the difference in 27 minutes. After receiving the ball from Sabina, he entered the box and put the ball into the net with great skill.

Three minutes later, Sabina scored her first goal and the team’s third goal. Seeing the cross coming from the right side, the Bangladesh captain intelligently entered the box and dodged the opponent’s defender into the net. Bangladesh went ahead with 3-0 goals.

Read more: There have been fruitful discussions with India

As soon as this goal did not end, the girls of Bangladesh filled the void by burning Pakistan in despair. In the 34th minute or so, Sanjida Khatun ran towards the box after catching a cross from Ankhi. Sabina gets caught in the net and floats in joy after receiving her cross.

Both teams went into the break with a scoreline of 4-0 goals. Sabina’s team dominated Pakistan even after the break. Sabina completed the hat trick in 58 minutes. Sanjida got the ball from throwing on the right and crossed into the box. Sabina realized the great flight of the ball and jumped into the net.

The red-green representatives were not satisfied even with 5 goals. Rituparna Chakma scored a great goal in the 76th minute. He put the ball in the air with a quick shot from far outside the box. Pakistan is busy trying to save goals several times in the end instead of conceding goals. Bangladesh left the field with a huge victory of 6-0 goals at the final whistle of the referee.