Human chain for not allowing to play 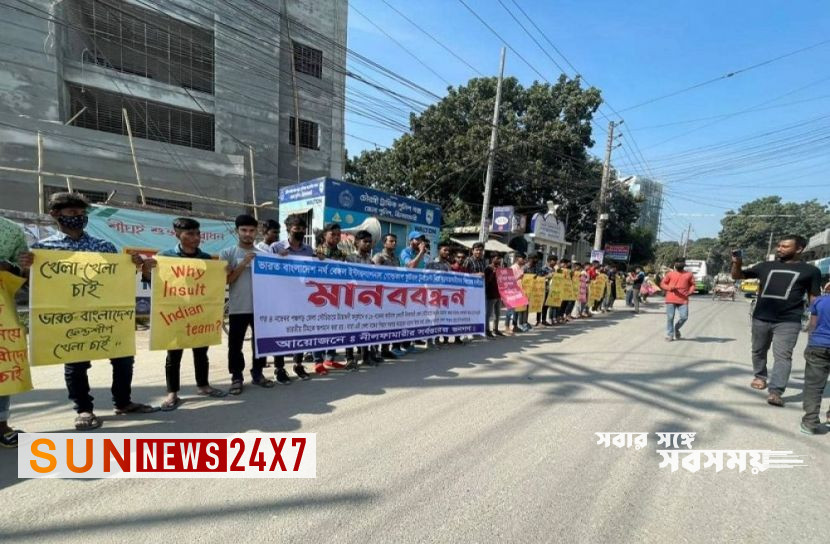 Today Monday (November 21) at 11 am, people from all walks of life of Nilphamari formed a human chain for an hour at Chowrangi intersection of Nilphamari city.

Speakers in the human chain said that the opening ceremony at Panchagarh District Stadium on November 4 and the final game on November 18 at Nilphamari District Stadium were scheduled to be held, but the games did not take place. Our friend India team has been insulted by this. A section in our country considers India as an enemy instead of a friend. They don’t want India to have good relations with Bangladesh. These conspirators are also in our beloved city Nilphamari.

At this time, football lover Sujan Mia said that India-Bangladesh North Bengal International Gold Cup football tournament has been conspiring from the beginning. They basically don’t want football to become popular in our Rangpur division. These conspirators will have to give their teeth-breaking answer to the people of Rangpur Division from all walks of life. So that they never get involved in the dirty conspiracy about our popular game football.

Abul Hossain, who participated in the human bond, said, “Rangpur division is a peace-loving division, we are all brothers and sisters, but one party has come forward to question our good work.” We want to warn against this human bond and say that instead of doing business with the football of Urbang, let’s all shoulder to shoulder and promote the football of Urbang at home and abroad.

Another football lover named Shafiq said, Nilphamari Sheikh Kamal Stadium, Dinajpur Stadium, Rangpur Stadium, Kurigram Stadium, Panchagarh Stadium
These stadiums are not anyone’s ancestral property, our Prime Minister Sheikh Hasina gave them to us, everyone can play here. Moreover, India is our friend in the days of danger, they have been insulted by not allowing them to play. To insult India is to insult Bangabandhu Sheikh Mujibur Rahman.

He also said that the Nilphamari Sheikh Kamal Stadium, Dinajpur Stadium, Rangpur Stadium, Kurigram Stadium, Panchagarh Stadium should be opened immediately, so that the football lovers of Upper Bengal can watch the India-Bangladesh North Bengal International Gold Cup football tournament spontaneously regardless of the team.