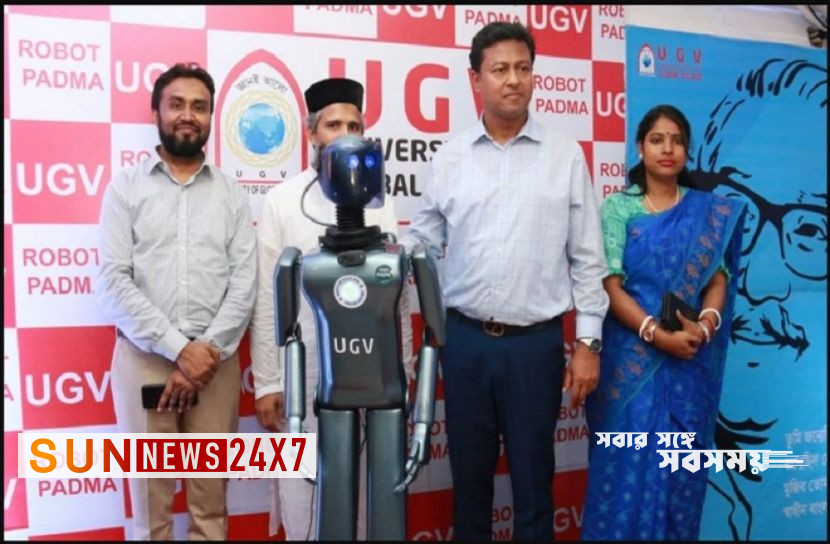 Sun News Desk: University of Global Village in Barisal has developed a humanoid robot. Which has been named ‘Padma’. The robot was given this name to commemorate the inauguration of ‘Padma Setu’, a symbol of Bangladesh’s dreams and development.

Computer Science and Engineering (CSE) department lecturer Abdur Razzak, head of the robot innovation team, said that the teachers and students of the CSE and EEE departments of the University of Global Village (UGV) developed this robot. Which is named ‘Robot Padma’. The robot was named to commemorate the inauguration of the ‘Padma’ bridge, a symbol of dreams and development.

He also said that it was the dream of the people of the southern region to take the robot to the inauguration ceremony of the Padma Bridge. But could not take due to some complications. But today the robot was inaugurated. Robot Padma can recognize all people.

Read more: Pakistan is walking in the way of India!

Apart from this, this robot will be able to detect the attendance of university students, serve food in restaurants, and play the biggest role in the event of fire.

Mahadi Bin Habib, a student who participated in the Robot Padma project, said that such a big project has been taken up by the university. Robot Padma has been developed using fully indigenous technology. Even its build-in software is done in university labs.

The design, voice, coding of the robot was done by the students of the university. AS Fardin Sir was the chief engineer. Under his supervision, we 8 students worked day and night to build the robot.

Deputy Commissioner Jasim Uddin Haider, the chief guest at the opening ceremony, said that Father of the Nation Bangabandhu Sheikh Mujibur Rahman’s dream was to build a science-minded country. Honorable Prime Minister is taking us in that direction.

He also said that last June 25 (Saturday) Praner Padma Setu was inaugurated. Dedicated to that bridge, the robot ‘Padma’ has been invented by the university teachers and students. This invention of their research will make our daily life easier.

University of Global Village will always have district administration. I hope that they will take the country forward with this new and innovative activities.

‘Robot Padma’ is an expression of research and passion of faculty and students of the university. I have been providing support for the expansion of university education and research at various times. Any assistance will be provided in future.

Chairman of the Board of Trustees. Md. Under the chairmanship of Imran Chowdhury, University Registrar (Acting) gave a welcome speech at the opening ceremony. Lokman Khan Students of other departments of the university were also present at this time.