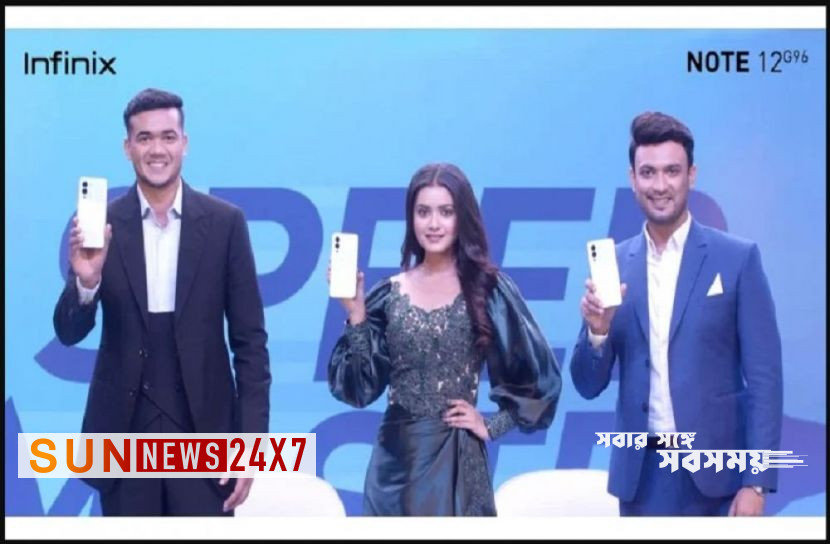 Sun News Desk: The popular Chinese smartphone brand ‘Infinix’ has unveiled the latest and modern Note series smartphone ‘Note 12 G96’ to the young generation of Bangladesh through a virtual medium.

Read more: All achievements are under the leadership of Awami League

Before the smartphone was commercially launched in Bangladesh, it was promoted on Facebook, one of the most popular social media.

During this time, the product ambassador of note series, the best speed star, Taskin Ahmed, and the brand ambassador of Infinix, popular model and actress Tanzin Tisha, and the senior brand manager of Infinix Bangladesh were present. Iftekhar Uddin Sani.

Infinix ‘Note 12 G96’ series is called Speed ​​Master. The fast speed of smart features will add a new dimension to the experience. Apart from that, consumers will get extra comfort in using the smartphone due to its light weight. The multi-featured affordable mobile phone ‘Note 12’ model has MediaTek Helio G96 flagship processor, 6.7 inch FHD+ AMOLED display and 13 GB extended RAM facility.

Read more: 100 crores for the victims in Afghanistan

The model has a 7.8 mm ultra-sleek design. Color variants include Force Black, Snowfall White and Sapphire Blue. The charging facility includes a 33W flash 5000mAh battery. As a result, a single charge lasts the whole day. The battery has a maximum charge cycle count of 800.

Features facial, fingerprint unlock, monster game kit to enhance aesthetics. The camera has a 50-megapixel triple ultra-night camera set-up (50-megapixel + 2-megapixel + AI lens). As a result, the camera can capture great images even in low light. There is an opportunity to capture video with blurring feature at 1080 pixels and 30 fps.

There is memory fusion technology. The smartphone’s 8 GB RAM can be easily expanded up to 13 GB. Able to sync RAM and ROM faster. Memory Fusion technology allows consumers to multi-task without interruption without slowing down the consumer’s battery.

Moreover, it is able to handle the processing speed of various apps through optimization. So it is possible to easily increase the number of background apps from 9 to 20.

Incidentally, the phone will be available on online marketplace Daraz. First 100 buyers will get the offer prize.

Read more: Distribution of relief to flood victims in Feni

The smartphone is available in offline markets across the country from last June 21 (Tuesday). Apart from that, the ‘Note 12 G96’ model will also be available from the brand outlet as an additional gift.

Previously, the G88 model of the Note 12 smartphone also met the expectations of fans. The price is 19 thousand 999 taka.