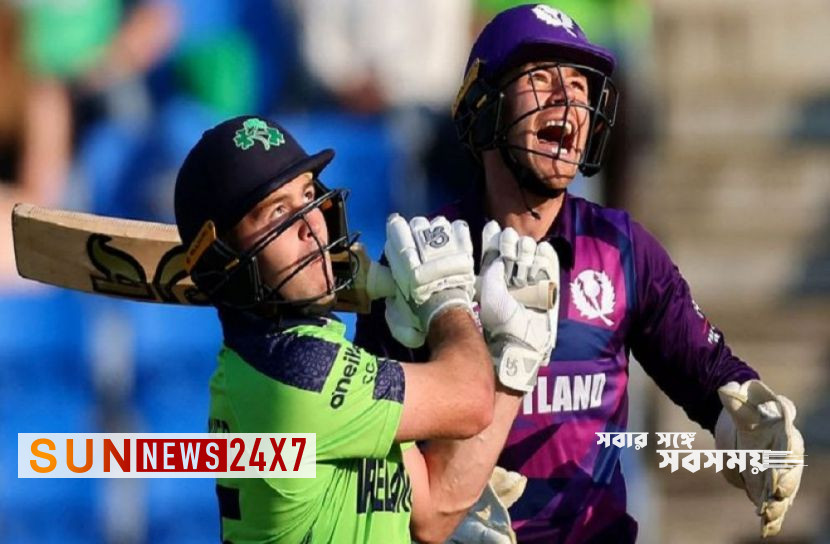 Sun News Desk: The Irish won by 6 wickets with 1 over in hand due to Kurtis Kampfer’s batting rampage. Ireland turned around in such a match without losing. They also topped the big target of 177 runs thrown by Scotland with 6 wickets and one over in hand.

Read more: Having to be a bit frugal

Ireland were in danger when Andy Balbirani (14) and Paul Stirling (8) departed in the power play. In the second innings they stumbled by losing Lorcan Tucker (20) and Harry Tector (14) by just 4 runs.

Ireland’s 61 for 4 after 3 balls of the tenth over. They seemed to have lost control of the match. But Campher and George Dockrell changed the whole scenario from the remaining 9.3 over wickets. This pair scored 50 runs off 27 balls. Both batsmen reached their hundred in the fifth wicket off 23 balls. By then Kampfer had celebrated his half-century off 24 balls with 3 fours and 2 sixes.

Dockrell-Kaempfer laid the foundations for victory before the death overs. Score 153 at the end of 17th over. In the last three balls of the 19th over, Campher hit Josh Davey with three consecutive fours and left the field to win the team. At the end of 19 overs the score was 180 for 4 wickets.

Kampfer was unbeaten on 72 runs off just 32 balls with 7 fours and 2 sixes. He won the man of the match award as expected by taking 2 wickets with only 9 runs in hand. At the other end Dockrell was unbeaten on 39 off 27 balls with 4 fours and 1 six. The partnership of the two was 119 runs off 57 balls.

Batting first at Hobart’s Bellerive Oval, Scotland opener Michael Jones was on fire. He kept one end and played till the 19th over. Scored 86 runs with 6 fours and 4 sixes from 95 minutes at the crease. 55 balls played.

Jones was on his way to a half-century off 38 balls with 4 fours and 2 sixes. But Josh Little was caught for a boundary by Mark Adair at long on. He left the field with seven balls left.

Before that, he built the foundation of a large collection. Jones was dismissed for the team’s 170, adding 6 more runs later. Jones made 59 with Matthew Cross and 77 with Richie Berrington. His collection for the fourth wicket with Lisk was 37 runs. Cross scored 28 off 21 balls, Berrington scored 37 off 27 balls. Campher responded to Jones later in the day.

With this result, ‘B’ group was opened. If West Indies beat Zimbabwe in the afternoon match, the last two matches will be unwritten knockouts.