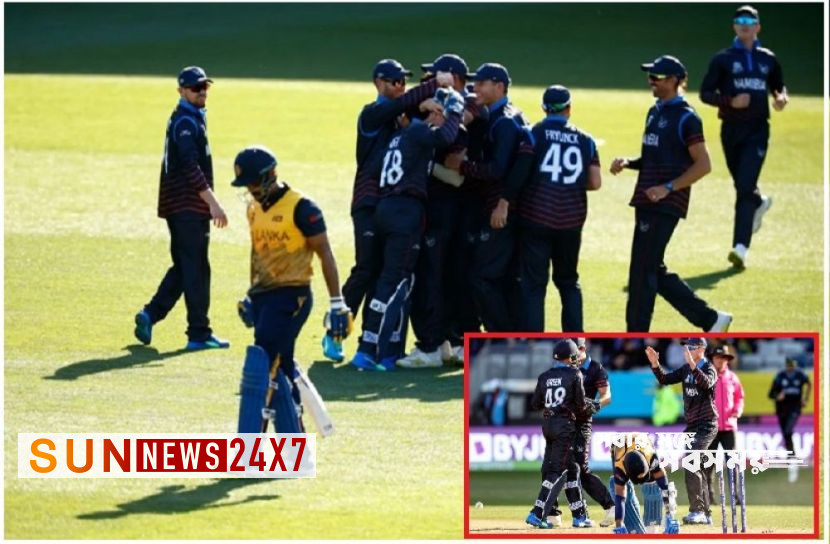 Sports Desk: Sri Lanka, who won the title of Asia Cup by defeating teams like India and Pakistan, came to the first match of the World Cup and faced a loss.

Team Sri Lanka probably took it lightly with a team like Namibia as their opponent. And Namibia played, with nothing to lose.

As a result, in the first match of this year’s World Cup, Namibia beat Sri Lanka by 55 runs by giving fearless cricket and creating a huge incident.

After losing the toss and batting first at Kardinia Park in Geelong, Namibia collected 163 runs for the loss of 7 wickets. In reply, Sri Lanka were bowled out for 108 runs in 19 overs.

In the picture painted in the match, Namibia looked like Sri Lanka and Lanka looked like Namibia. After coming down to bat with a target of 164 runs, the Asia Cup winning Lankans were seen shaking their knees in front of the Namibian bowlers.

What batting, what bowling and what fielding – as if ‘Champion Sri Lanka’, Team Namibia became great.

On the other hand, what a great line and length from the Namibian bowlers! They did not give a chance to the Lankan batsmen to form a good pair.

Neither Dasun Shanaka nor Vanuka Rajapaksa, who became dangerous, allowed much progress. Shanaka scored 29 runs off 23 balls and Rajapaksa was dismissed for 20 runs off 21 balls.

Namibia got off to a slow start with the bat; But at the end, they increased the pace and threw a huge challenge of 164 runs in front of Sri Lanka. When a team far behind the Lankans in terms of strength put up such a score, there was no doubt that the match would naturally be exciting.

But Sri Lanka completely back footed from the start to chase the run. In front of the Namibian bowling, the Lankan batsmen are in disorientation.

At the time of the toss, Namibian captain Gerhard Erasmus said, ‘We have the bowlers to do well in these conditions.’

The Namibian bowlers were echoing him in bowling. In the beginning, Namibia completely suppressed the Lankans by picking up 3 wickets for 21 runs. After that, the Lankans kept losing wickets at regular intervals. As he could not move the wheels of the run, the pressure started to increase. Which ultimately leads to their defeat.

Basically, the difference is made by veteran David Wise. He brought the break through in the beginning. He made Kushal Mendis caught by Jane Green. Mendis returned with 6 runs off 6 balls. After that, the young pacer Ben Shikongo raised the possibility of a hat-trick by picking up two wickets in two consecutive balls.

First, Pathum Nishanka is caught by JJ Smit by Deyan Shikongo. He got out with 9 runs off 10 balls. Danuska Gunathilaka caught the edge of the bat behind the wicket. However, Shikongo could not complete the hat-trick in the next ball.

Dhananjaya de Silva tries to turn around. But after scoring 12 runs, Ian Frylink showed him the way to Sajghar. He returned with a catch in the hands of Shikongo. Vanuka Rajapakse and captain Dasun Shanaka combined to try to turn around the fifth wicket partnership.

But Scholtz did not allow their 34-run pair to increase. He broke the pair by turning Rajapaksa into a catch by La Cooke. Rajapakse returned with 20 runs off 21 balls. Dasun Shanaka could not survive long after losing his partner. He scored 29 runs off 23 balls. He hit 2 boundaries and 1 six.