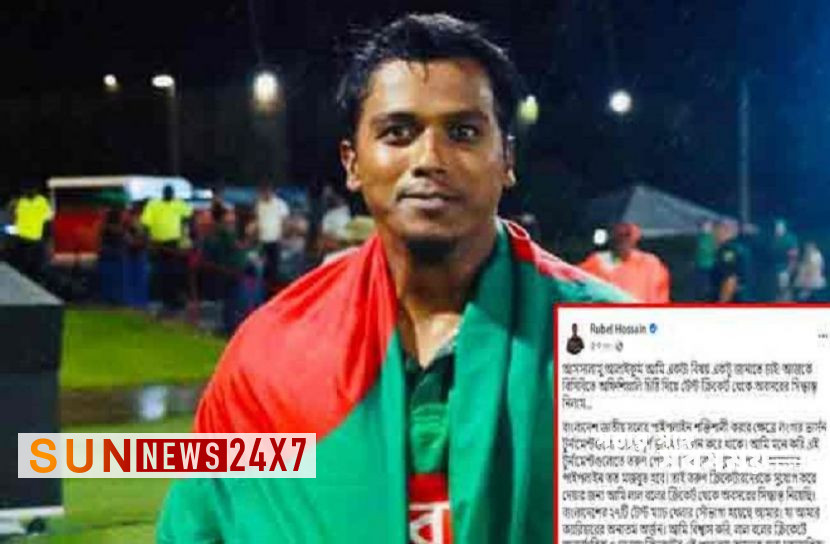 Sports Desk: National team pacer Rubel has announced his retirement from Test cricket. However, he wants to continue T20 and ODI. Rubel informed the Bangladesh Cricket Board about his decision.

Rubel confirmed the matter in a post on his verified Facebook page on Monday (September 19) morning. He wrote there that he decided to give opportunities to young people called Lal. However, from Sunday it was heard through social media that pacer Rubel Hossain is retiring from red ball cricket. However, it was learned from BCB sources that he did not give any official mail.

In the post, Rubel wrote, ‘Assalamu Alaikum, I want to tell you something! Today I decided to retire from Test cricket by writing an official letter to BCB….

Read more: The US will protect Taiwan

Longer version tournaments play an important role in strengthening the pipeline of the Bangladesh national team. I think the more opportunities young pacers get in these tournaments, the stronger our pipeline will be. So I have decided to retire from red ball cricket to give opportunities to young cricketers.

I have been lucky enough to play 27 Test matches for Bangladesh. Which is one of the achievements of my career. I believe, gratitude to those who have supported me in this journey of international and domestic cricket in red ball cricket. I hope to see you in the coming days. I left the test. However, I have the potential to give more to the Bangladesh national team in the ODI and T20 formats. So I will continue to play regularly in DPL, BPL and other white ball tournaments. pray for me May I give you colorful dreams for the rest of your white ball life.

Rubel also wrote that playing 27 Test matches for Bangladesh is one of the achievements of his career. He said that if the youth get more opportunities, the country’s pipeline will be stronger. Bagerhat’s pacer also thanked those who have been by Rubel’s side for so long.

Incidentally, for the last one year, he was not seen on the field with the ball in any match for the national team. The pacer last played in the national team jersey in New Zealand last year, after that he was not seen again. Although Rubel has been suffering from a back injury for several months. Currently, this pacer is seen spending time in Sylhet with his family.

Assalamu Alaikum, I want to tell you something! Deciding to retire from Test cricket by writing an official letter to BCB today…