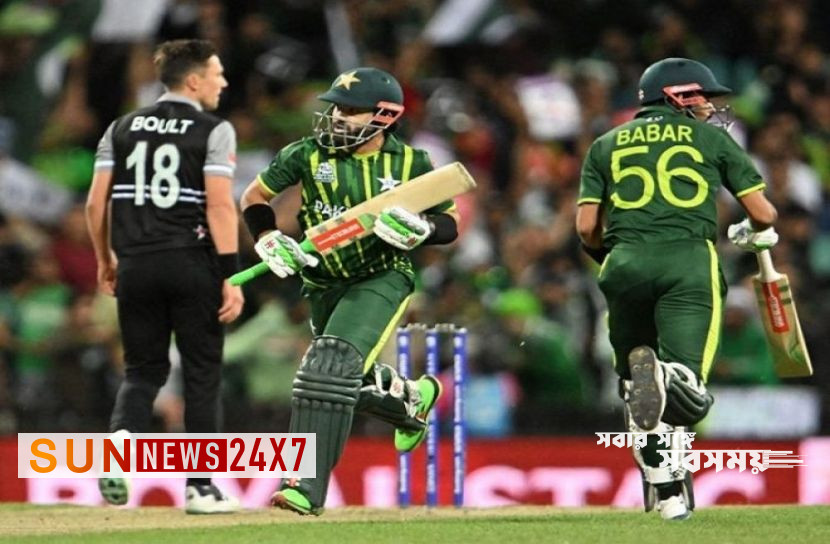 Sports Desk: Pakistan reached the final by defeating New Zealand by 7 wickets in the crucial match of the T20 World Cup semi-final.

New Zealand won the toss and elected to bat in Sydney. The beginning was good. Shaheen Shah Afridi lbw to Finn Allen (3 balls 4) in the third ball of the innings. Devon Conway, who was playing at the sight, was run out by Shadab Khan’s direct throw for 21 off 20 balls.

Read more: I have won the war, I will win the game

They could not take advantage of the power play at all. 2 wickets can lose only 38 runs. In the eighth over, Mohammad Nawaz made a return catch to Glenn Phillips (6 off 8 balls).

From there, Kane Williamson and Darrell Mitchell scored 68 runs off 50 balls. Williamson was bowled for 46 off 42 balls by Shaheen Afridi. But Darrell Mitchell played till the end of the innings. He remained unbeaten on 53 runs off 35 balls with 3 fours and 1 six. James Neesham scored 16 off 12 balls.

Shaheen Shah Afridi is the most successful bowler of Pakistan. He took 2 wickets for 24 runs.

In reply, Pakistan got off to a flying start chasing the target of 153 runs. Captain Babar Azam made a pair of 105 runs in 12.4 overs with Mohammad Rizwan.

After completing his fifty off 38 balls, Babar returned with a catch near the boundary while hitting a six. Before that, this Pakistan captain scored 53 runs off 42 balls.

After Babar Azam got out, Rizwan made a partnership of 27 runs off 26 balls with Mohammad Haris. He completed his fifty in this pair. After fifty, Rizwan scored 57 runs in 43 balls with the help of 5 boundaries.

After that, Mohammad Haris took the team to the port of victory with Shan Masood. Pakistan needed just 3 runs off 7 balls to win. Harris was dismissed in the last ball of the 19th over. Before that, he scored 30 runs in 26 balls with two fours and a six.

Pakistan needed only 2 runs in the last over. Tim Southee bowled the first ball of the over wide. Shan Masood took Pakistan to the final by securing the team’s victory with a single in the next delivery.