Rare manuscript of Einstein’s theory of relativity sold at auction 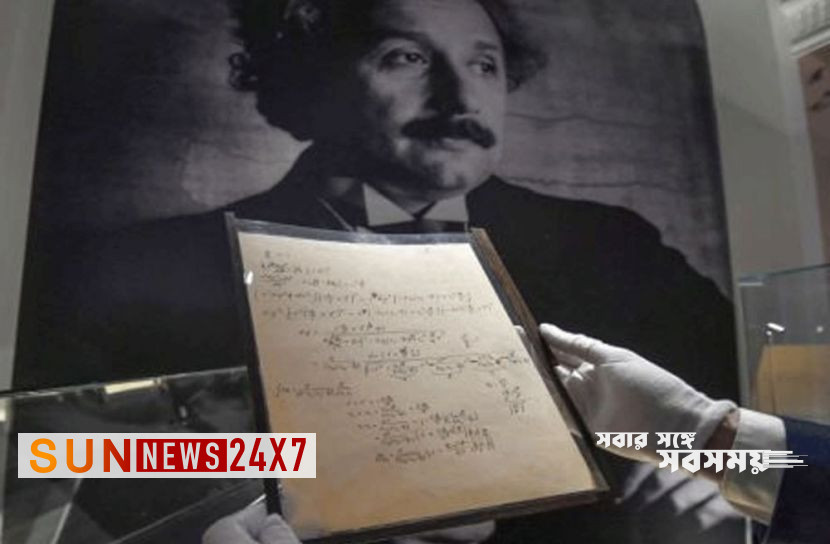 News Desk: The rare manuscript of the world-famous theory of relativity written by Nobel-winning scientist Albert Einstein and Swiss physicist Michele Beso has been sold for around 112 crores in Bangladeshi currency.

The manuscript was sold for a record price in the French capital Paris on Tuesday (November 23).

Einstein used to throw all the handwritten mathematical equations and their solutions, many unfinished manuscripts in the dustbin. That was his habit.

The 54-page manuscript is entirely handwritten. In which Einstein wrote for 26 pages.
June 2013, in Zurich. And 25 pages were written by his good friend Swiss engineer Michel Beso. He sat with Einstein in Zurich at that time about general relativity, who was intoxicated by untangling various mathematical problems. Einstein’s and Beso’s manuscripts of mathematical equations and their solutions were, however, riddled with errors. As a result, Einstein realized that those mathematical equations would not reach his goal. Besso returned to his home in Italy somewhat discouraged. Later, sitting in Zurich, Einstein reached his goal through other mathematical equations. alone As a result, Einstein’s General Relativity was published in November 2015. Which changed all the ideas about the universe at that time. Six years later, in 1921, Einstein won the Nobel Prize.

Back in Italy, Besso also tried to find out where the mathematical equations were wrong and correct them. could not He gave up. But he kept Einstein and the 54-page manuscript written by his hand. Before his death, Beso handed over the manuscript to his son Vero. Vero later handed it over to Pierre Speziali, the editor of the Einstein and Beso manuscripts. Later, when a collection of Einstein’s papers was published, Speziali handed over the manuscript to the publisher. Einstein died in 1955 at the age of 76.

According to the Christie’s website, “This is one of only two manuscripts from the earliest days of general relativity that have been found. Prior to the auction, it was estimated to fetch between $2.4 million and $3.5 million. But all assumptions proved wrong and the auction ended at four times the price. The manuscript was sold for $1.3 million for the fee. No other manuscript written by Einstein has fetched so much at auction before.