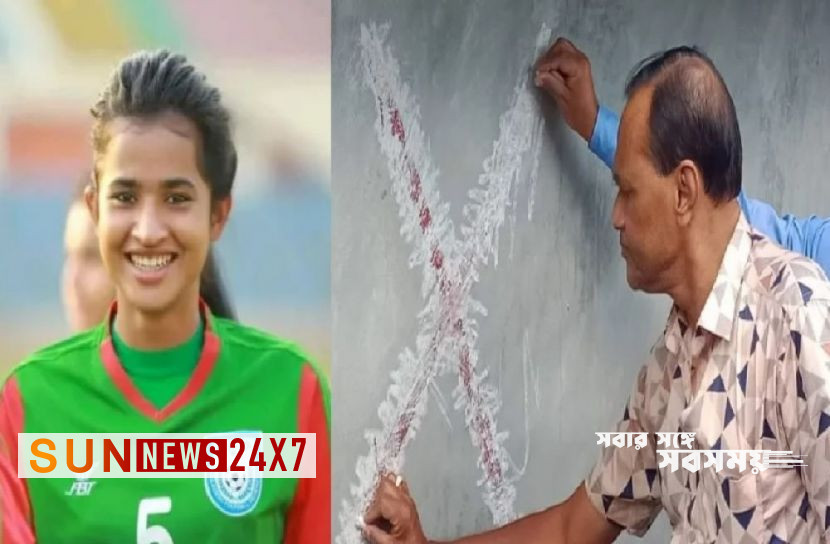 Sun News Desk: Deputy Commissioner Humayun Kabir went to the house of famous footballer Masura Parveen in Satkhira. In front of him, the red cross mark given by the Roads and Highways Department was removed in the yard of Masura’s house.

On Thursday (September 22) under the direction of Satkhira District Commissioner, in the presence of Sadar Upazila Nirbahi Officer, the red cross sign given by the Swaz authorities was removed at around ten o’clock. At this time, the District Commissioner made a sweet face to Sabina and Masura’s family.

At that time, Satkhira District Commissioner Humajun Kabir said, until Masura’s family moves their house from the designated area of ​​Bangladesh Road Department and builds a new house, they (Sawz) have been ordered to suspend their work. He also said that when Sabina and Masura return home, they will be given a colorful welcome.

It is known that Masura’s house is in Satkhira district in the southern part of the country. Doubts arose over the non-existence of Masura’s house in the Binerpota area on the banks of the Sadar Upazila Palla river, four kilometers from Satkhira town. The land of the home of this tigress, Safjayi, is in the designated area of ​​Sauz work.

The authorities needed to demolish Masurad’s house for Sauz work. For this, a red cross was also placed on the wall of his house. However, Deputy Commissioner of Satkhira Humayun Kabir has ordered to keep the head of Masura’s family, one of the artisans who gave the country the crown of excellence in South Asia, intact.

Four kilometers away from Satkhira town, Sadar Upazila is the home of Masurad in Binerpota area on the bank of Palla river. His parents and two sisters live there. On Wednesday (September 21) afternoon, they went to their house and spoke to Masura’s father Rajab Ali and mother Fatema Begum. At this time it can be seen that three cross marks have been given on the back wall of their room.

Rajab Ali, Masura’s father, said about the cross mark, “Bangladesh won the honor of becoming the champion in 2018 with my daughter’s only goal in the under-18 field.” Our lack of accommodation came to the attention of the Minister of State for Youth and Sports. Then he assured us that he would give us a place to rest. But the land given to me had 15 feet of water. I did not get help even after running around in various offices for many days.

Read more: I will not import eggs

He also said, forced to fill the ground with three lakh taka received by Masura from the Bangmata Gold Cup. At that time Masura was at home for 28 days. He wanted to go to Dhaka from home for two days. After 26 days, I built a house with the prize money of my daughter. Only two days after that, Masura went to play in Dhaka from his new house.

He also said that earlier I used to rent a dilapidated two-storey house in Itagacha Purwapara of Ward No. 7 of Satkhira Municipality. Rice and walls were falling. Masura was forced to build this house with his savings. Earlier, I used to run my family by selling fruits and vegetables in the area in a van. I can’t even do that now due to illness.

Rajab Ali said, we are almost destitute after spending so much money to build a house. Meanwhile, my body is not good. can’t work Family runs on daughter’s playing money. The Roads and Highways Department will evict the illegal structures. As such, our house has been marked with a cross. I have built a house on 8 cents of land available from the government. If it is broken, where will I be with my wife and children?