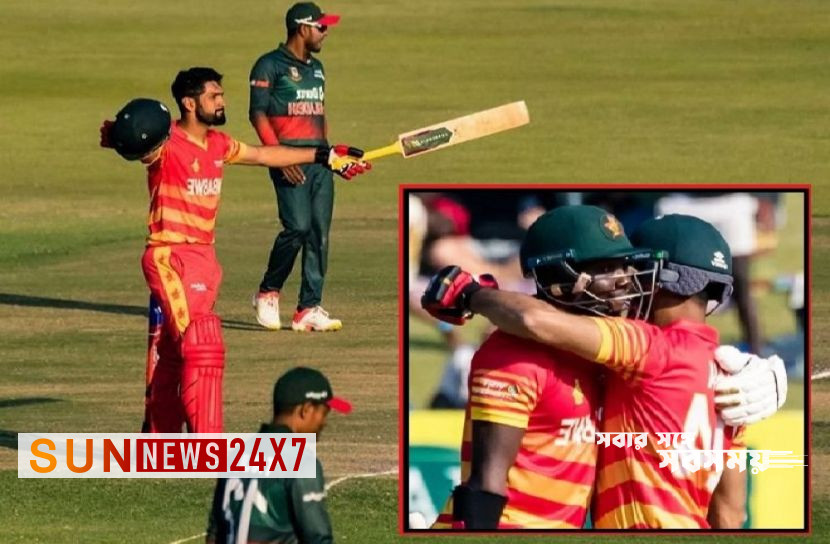 Sports Desk: The young team has been criticized after the loss to Zimbabwe in the T20 series. The Tigers have never lost a T20I series against this opposition before.

Bangladesh has lost the ODI as soon as the ongoing criticism has not stopped. In this format, the Tigers, who have competed with the big teams, were beaten by Zimbabwe by 303 runs.

Sikandar Raja and Innocent Kaya scored a pair of centuries to take Zimbabwe past the target of 304 runs with 5 wickets and 10 balls in hand in the first ODI of the series in Harare on Friday (August 5). Raja ended the match by hitting a six. He remained unbeaten on 135 runs off 108 balls with 8 boundaries and 5 sixes.

Zimbabwe didn’t get off to a good start chasing a huge target. Mostafizur Rahman was hit in the first over. Zimbabwean captain Regis Chakava pulled the ball onto the stumps while cutting the cutter master. He returned with 2 runs as a bowler.

Shariful Islam also took the wicket in the next over with the ball in hand. This time Tarisai Musakanda threw the ball in the sky and Mosaddek Hossain took an easy catch. Zimbabwe lost 2 wickets for 6 runs.

Medvere and Innocent Kaya handled the initial shock a lot. Their pair had settled down. This pair of 56 runs from 68 balls finally broke in a runout. Zimbabwe lost 3 wickets for 62 runs in the 14th over.

Interestingly, a misfielding is the ‘Shapebor’ of the Tigers. Innocent Kaya and Wesley Medvere ran to take two for one run when the ball ran out of the fielder’s hand.

But Medvere (19) could not reach the non-strike end. Substitute fielder Taijul Islam could not catch the ball at first but immediately picked it up and threw hard. The bowler Mehdi Hasan Miraj broke the wicket in the blink of an eye.

After that, Kaya and Sikandar became the king’s resistance pair. The pair could have broken 81 runs. A runout was likely. But the TV replay shows that Kaya survived for a while.

After picking up 3 wickets for 62 runs, there was an air of relief in the Bangladesh camp. Sikandar Raja and Innocent Kaya combined that in a century pair. This pair handed the match to Zimbabwe.

Their 192-run stand from 172 balls was finally broken by Mosaddeq in the 42nd over of the innings. Innocent Kaya top edged while slogging. The Zimbabwean batsman scored a career-best 110 runs off 122 balls with 11 fours and 2 sixes.

Earlier, after the victories of Tamim Iqbal, Liton Das, Enamul Haque, Mushfiqur Rahim – top order batsmen put up a huge collection of 303 runs for 2 wickets in the fifties of the first four batsmen.

For the second time in ODIs, the first four batsmen of the top order scored half-centuries. Earlier in 2014, the Tigers showed such a feat against Pakistan in the Asia Cup.

Mushfiq and Vijay were also in that record. Muminul Haque and Imrul Kayes were with him. This is the fourth time that four Bangladeshi batsmen have scored fifty in an innings.

During the toss in Harare today (Friday), Zimbabwe captain Regis Chakava said the bowlers could get help from the wicket early on.

That’s why Zimbabwe won the toss and decided to field first. However, in the beginning, the two Bangladeshi openers Tamim Iqbal and Liton Das did not allow the bowlers to take that advantage.

Bangladesh lost the toss in the first ODI like the three matches of the T20 series at Harare Sports Club ground. Tamim’s team batted first at the invitation of the host Zimbabwe. Tamim opened Bangladesh’s innings with Anuj’s teammate Liton.

Then the current captain Tamim Iqbal opened a new milestone for Bangladesh in ODI cricket. He entered the milestone of 8000 runs first. Tamim completed 8000 career runs by taking 57 runs in the first ODI against Zimbabwe.

However, after entering the milestone, Tamim could not stay on the wicket for long. The Tiger skipper scored 62 off 88 balls before being dismissed by Sikandar Raja in the 26th over of the innings. Which is his 54th ODI half-century.

Liton Das was batting brilliantly. He was moving towards the century. But coming to personal 81 runs, the right-handed batsman suddenly pulled his leg. It was such a situation that he could not even stand up. As a result, he had to leave the field lying on a stretcher.

After that, Enamul Haque Vijay made a stormy pair of 96 runs off 76 balls with Mushfiqur Rahim. Vijay completed his fifty off 47 balls by hitting a six. He took an easy catch at deep cover for a personal 71 runs. But Madvere dropped that catch as Ngaravar said.

Although Vijay could not use that opportunity to return to the ODI team after three years. By adding two more runs to his name, he again gave the catch in the sky of Longon. Niachi got the wicket when Musakanda palmed it. 6 boundaries and 3 sixes were hit in Vijay’s stormy innings of 73 runs from 61 balls.

Mahmudullah and Mushfiqur Rahim made the team cross 300 in an unbroken partnership of 36 runs off 25 balls. Mushfiq remained unbeaten on 52 runs off 49 balls with 5 boundaries. Mahmudullah scored 20 off 12 balls with 2 fours.