The Netherlands will meet migrant workers 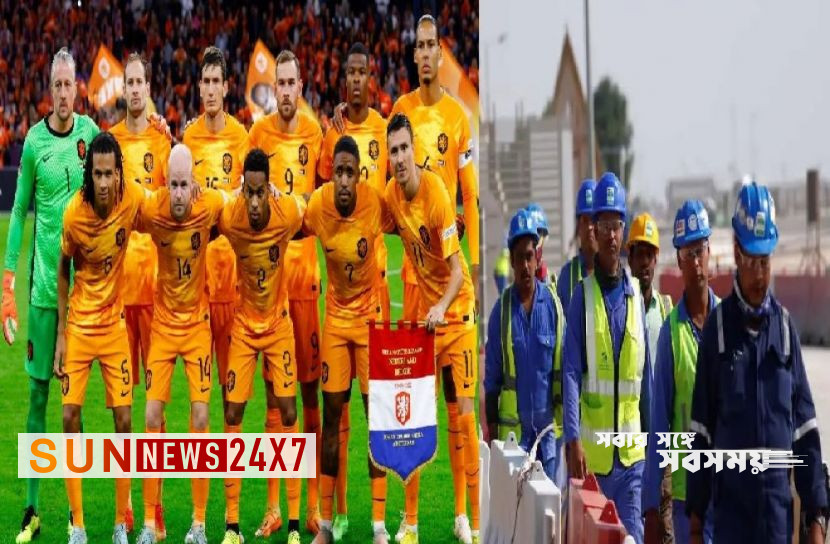 Sun News Desk: The 22nd season of ‘The Greatest Show on Earth’ World Cup football is starting on November 20 in the Middle East country of Qatar.

Qatar is beautifully decorated. Eight stadiums in five cities of the country have been decorated with a touch of aesthetics. This has been said in a report of ESPN.

However, migrant workers have sweated in the construction of these aesthetic structures. The Western world has accused Qatar of violating the rights of migrant workers in building World Cup facilities.

Read more: The government has not wasted a single rupee

There are many complaints against the Qatari authorities, including paying them less, not paying their fair dues, and treating them inhumanely. Several workers were also killed during the construction of the infrastructure for the World Cup.

There has been a huge protest in various countries of Europe including England, Germany, France. In addition, the rights of Qatari migrant workers have also been questioned by human rights organizations around the world.

The Netherlands squad will meet the migrant workers who are working tirelessly to build various infrastructures including the World Cup stadium. This is a plus for the neglected and underprivileged workers.

Not only the external beauty, the stadiums are also using the latest technology. The organizers have said that each stadium is air-conditioned and environmentally friendly so that the World Cup is not in question in the heat of the Middle East.

It is known that the Netherlands football team will meet 20 migrant workers on November 17. They will inquire about their condition. Not only this, the workers will also get a chance to attend a practice session of the players.

The Royal Dutch Football Association or Dutch FA (KNVB) is one of the few football associations in the world to criticize the rights and working conditions of migrant workers in Qatar. Most of Qatar’s 300,000 people are immigrants.

Last year, a report by the human rights organization Amnesty International highlighted the plight of migrant workers in Qatar. However, as always, the Qatari government denies the allegations. Louis von Gaal said, ‘We have this interview to draw attention to the dire situation of migrant workers.’

“Having the World Cup in Qatar is ridiculous,” von Gaal said earlier this year. At the time, he complained that FIFA was moving the tournament to the Gulf country only for financial and commercial reasons.

The Netherlands has already announced the team ahead of the upcoming World Cup in Qatar. The country announced the 26-member World Cup squad on Friday. Liverpool defender Von Dijk has been announced as the captain of the Dutch World Cup team. In the 2010 World Cup, the Dutch team became runners-up after losing 1-0 to Spain in the final.

Netherlands is in ‘A’ group in this year’s World Cup. The other teams in the group are hosts Qatar, Senegal and Ecuador. The Netherlands will start their World Cup campaign against Senegal on November 21.