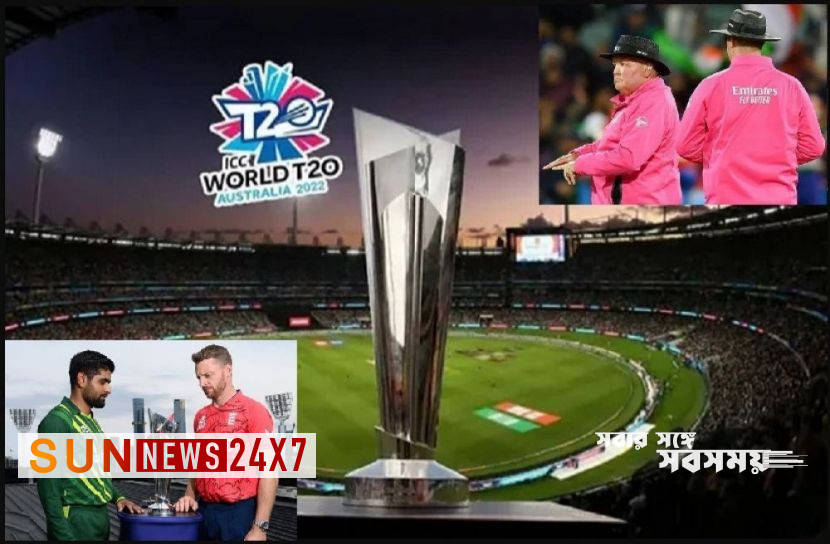 Sports Desk: England-Pakistan are going to face each other in the battle of excellence at the Melbourne Cricket Ground in Australia. Cricket fans are excited. Everyone is waiting.

Who will kiss the World Cup title at the end of the T20 final? Pakistani Babar Azam or English Jos Butler!

That question will be answered on Sunday (November 13) after Maharan, which starts at 2 pm.

But before that disappointed cricket fans. Because, the two onfield umpires assigned for the final match are not of their choice.

Read more: Berkeley is the chairman of the ICC again

According to the list announced on Friday (November 11), Marai Erasmus of South Africa and Kumar Dharmasena of Sri Lanka will be the onfield umpires for the match.

On the other hand, Chris Gaffney of New Zealand has got the responsibility of TV umpire. Australia’s Paul Rifle is the fourth umpire. The referee of the final match is Sri Lankan Ranjan Madugale.

Australia’s Paul Reiffel has been selected by the ICC as the reserve (fourth) umpire.

Pakistani fans are disappointed to hear the names of the onfield umpires. Because Pakistan played under Marais Erasmus in the first match against India in the World Cup. India’s batting sensation Virat Kohli dominated Marais in that match.

In the last over of the match, Virat Kohli hit a full toss ball from spinner Mohammad Nawaz for a six. Then Kohli drew the umpire’s attention by making a no-call. In response to his words, Marais called the ball a no-ball.

Pakistan then lost the match. Pak fans complained that the umpire gave a no-ball on Kohli’s orders. Maybe the result of the match could have been different if there was no no ball.

A different discussion is going on about Sri Lankan Kumar Dharmasena. This is the umpire who in the 2019 ODI World Cup final gave England 6 runs instead of 5 in the ‘wrong’ decision to over-throw.

A lot of controversy arose about his decision later. There is no denying the importance of that extra 1 run in England’s World Champions title.

Pakistan’s opponent in the final on Sunday is England.